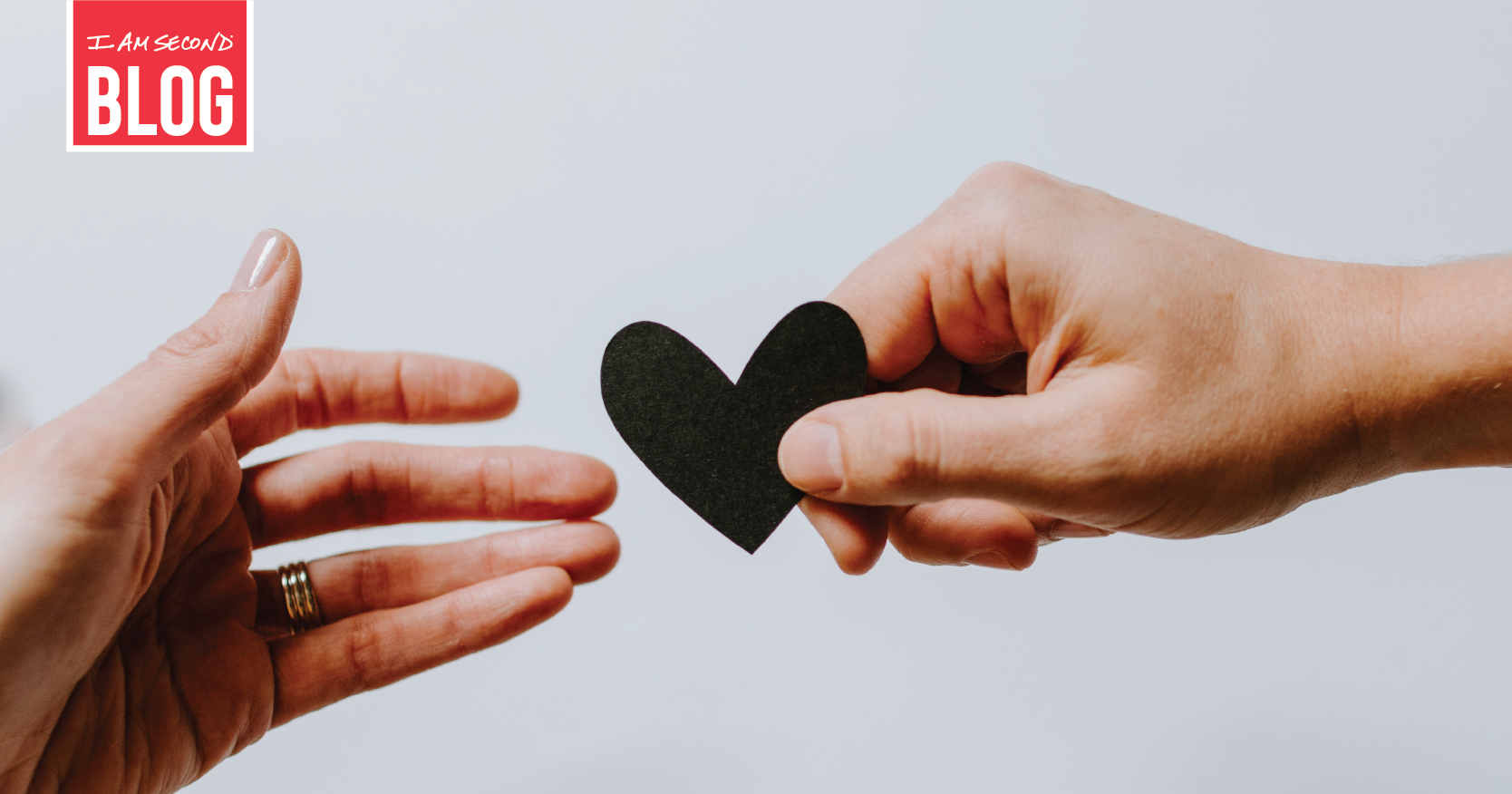 The following is an excerpt from Jonathon M. Seidl’s new book, “Finding Rest: A Survivor’s Guide to Navigating the Valleys of Anxiety, Faith, and Life.” It’s available now wherever books are sold.

To say I planned on telling the world my secret would be a lie.

I didn’t have some grand desire to reveal what I had only recently discovered but had been hiding ever since. It was January 2016, and I was working right here at I Am Second. Every day I was around stories that are intimate, deep, and personal. Stories of hitting rock bottom, stories of immense pain, and ultimately stories of true hope.

It was being around those stories that I think led me to open up the way I did and tell my own. My role here was to develop written content to publish between video releases, as well as to oversee any writing related to the videos: descriptions, marketing language, anything that would support and highlight the powerful stories. I cultivated a team of freelancers who were producing some incredible content for us on our blog. One writer in particular got extremely vulnerable, talking about her depression, her loneliness, and even her suicidal thoughts.  After reading and editing one of her stories, I was, I guess you could say, a little convicted.

Here you are asking other people to bare their souls, and you know you’re holding out, I told myself.

So one afternoon I went for it. I didn’t tell anyone beforehand, not even my wife. I just started writing. Words, thoughts, and ideas came flooding out. What resulted was the most honest piece of writing I had produced to that point. The title was just as honest: “It’s Time to Tell the World My Secret.” And here’s how it started:

We talk a lot about being real, raw, and relatable around the I Am Second office. I’m about to be more real and raw than I planned on being when I first started working here.

As I sit here writing this, I’m a little tired. Not because it’s 3:15 in the afternoon, but because I took my medication at lunch. My medication makes me tired. That’s why I usu- ally try to take it at night. And that’s part of the reason there are days I go to bed at 7:30 p.m. (I say “part” of the reason because the truth is I also have an 8-month-old daughter who likes to get up anywhere from 4:30–5:30 a.m.)

See, I have a secret that I’ve kept from a lot of people. I’ve told close friends and family. But I still have a fear about coworkers, bosses, and others knowing. I think the big reason is I don’t want anyone to ever use the excuse, “Oh, that’s just the ____ talking,” or, “Oh, you’re acting that way/feel that way because of the ____.”

So want to know what medication I take? It’s called Fluoxetine. You probably know it as its name-brand equivalent: Prozac. It’s a popular antidepressant. [...] But Fluoxetine can also be used to treat some other things. Those “other things” include anxiety and obsessive-compulsive disorder.

I have been diagnosed with anxiety and OCD.

I still feel a little something inside of me when I reread those words. Not fear, not dread, but emotion. Admitting you have anxiety and OCD, or any type of mental health issue, is terrifying.

But then I’m quick to remember the reaction I received to telling my secret and those thoughts fade. Seriously, the emails, letters, and comments people sent me were so overwhelmingly positive that it makes every little twinge worth it. Complete strangers were messaging me in droves, even contacting my wife and asking for her advice on how to help a loved one who is struggling.

The most stunning response was from a man named Jason.

“You’re probably never going to read this, but I think this article saved my life,” he wrote on Facebook. “Not really sure how to say thank you.” It’s hard to put into words what reading that did to me at the time. What it still does to me. And from there, the comments kept pouring in:

“Your stories mimic mine. But I failed myself by stopping my meds because I didn’t want to feel broken. I want to thank you for your honesty and vulnerability in posting your strug- gles. It was an awakening for me.”

“I was so afraid to call my anxiety what it was for so long. . . . I thought that medicine was a crutch and I should have control over my own mind enough to overcome those feelings. I kept it hidden from everyone and spent a good amount of time in emotional agony in search of the root of my problem.”

“Wow! Everything you mentioned in the I Am Second article is me to a T. . . . I’ve never talked about these things to any- one. I really thought it was just me. My dad is a pastor so a lot of this stuff I feel like I can’t share. Thanks for showing me I’m not alone.”

While I was encouraged by those comments, I was also heartbroken. The common thread in a lot of them was that the person had a mental health struggle, was a Christian, felt immense shame, was told that faith would “cure” them, and had zero support from their church or faith community as they fought their battle. Their families just didn’t understand what they were going through, medication and seeking help were demonized, they were restless, and they were alone. Many of them felt like the only way to get through their struggle was to hide it, ignore it, or deny it. In other words, they had to keep their secret inside. And I could relate. I felt many of those same things, and if not for the overwhelmingly supportive environment I found myself a part of at the time I came out with my secret, I’m not sure I ever would have been open about it.

And that’s why you’re reading this now. I want to tell your story by telling my story. I want to help you by putting into words what it’s like to be so confused and frustrated by what’s going on in your head that you retreat for hours, days, or sometimes years. I want to explain how you can address both the physical and spiritual aspects of what’s going on inside you and still have a deep and rich faith. I want to give family members who have been searching for answers some sort of relief and lifeline. I want to help the church better understand how to care for the members of the flock who have been misunderstood, misguided, or ignored. I want to help all of you finally get in the open what has been taboo and hidden. I want to show you how to take care of yourself. I want to help you understand what it means to take advantage of the common graces God has given us as tools in this fight.

I want to help you find rest — the type of rest that comes from understanding what’s going on inside of you, being understood by others, and knowing how to fight back with practical tools to overcome the disorder.*

But ultimately I want to help you understand why this is happening and how God is still working in the midst of it. I want to help change your view of what it means to have faith during the trials, and even undo some of the harm that’s been done to you in the name of God.

So I wrote a book on it. It’s a book that’s meant to be used as a battering ram to break down physical, spiritual, and relational walls when it comes to mental health. It’s for the person who struggles with anxiety and OCD and has built barriers around themselves, either intentionally or because they’re confused by what’s going on inside them. It’s for the family member of that person, so they can learn how to empathize with their loved one and help tear away the layers of helplessness that often plague those forced to wade through the secondary effects. And it’s for the church, which needs to be challenged to remove the thick stigma surrounding mental health and be Christ in real, hands-on ways to members who feel ostracized, lost, and hopeless. 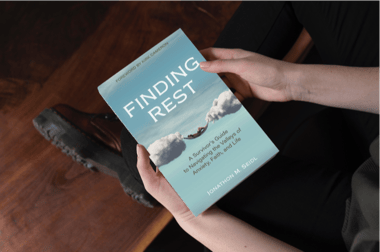 I hope you’ll check it out. It’s called, “Finding Rest: A Survivor’s Guide to Navigating the Valleys of Anxiety, Faith, and Life.”

My Big Move Away from Home and Why I Came Back