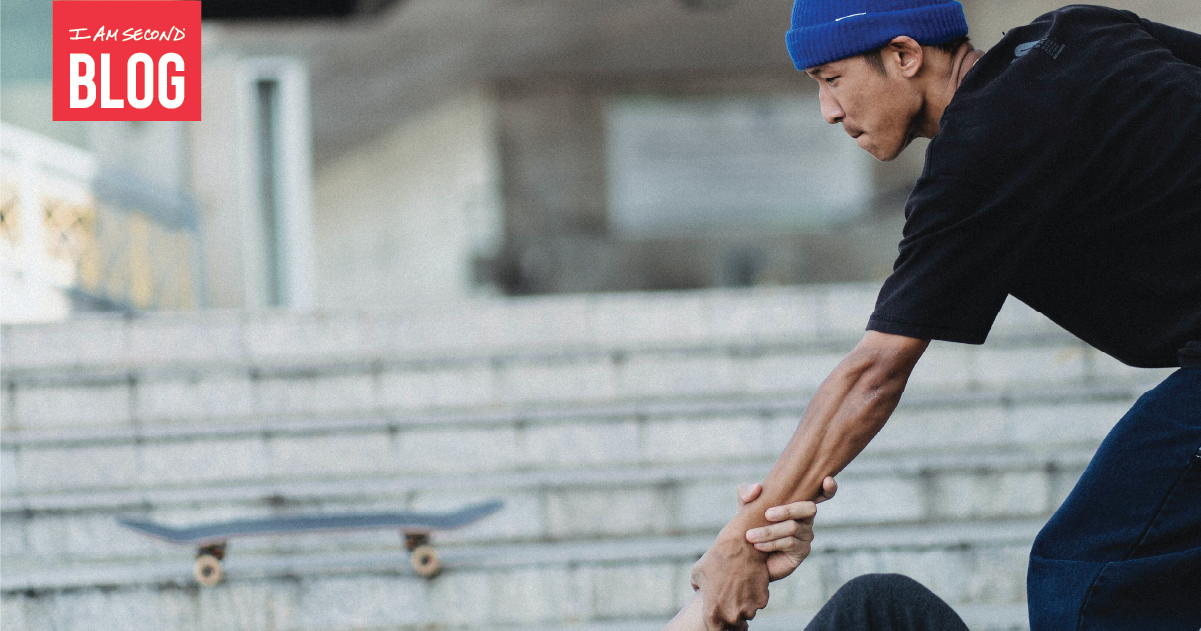 I’ve had two conversations in the last week that have me worried. They’ve been with people who give me the sense that they’re considering giving up. That phrase, “giving up,” can be euphemistic at times, so I want to be clear what that means: suicide, ending it all, death.

In some ways, I mean that to be jarring. Why? Because I think sometimes by dancing around the subject we do more harm than good. We want to sanitize what people are going through because it makes us, the person that isn’t considering killing themselves, feel a little better. So we hold it at arm’s length like we’re carrying a child with a dirty diaper. We make it more comfortable for us. Guess what? Our comfort doesn’t matter, especially in matters of life and death. Here’s the other thing: by refusing to say what’s actually going on, I think we give more power to the lies that are at the heart of those thoughts.

So I’m not going to do that. I’m going to call it what it is.

Anyway, like I said, those conversations have affected me. If you’ve been following me, you know that I’ve written a book on anxiety, OCD, and depression. Anxiety, OCD, and depression can kill you. My greatest hope is that people will read the book and choose life, that it will help them out of a dark time. My greatest fear is that they’ll read the book and choose to end it all anyway. I know I can’t control that, but I fear it nonetheless. I recently spoke at a conference on mental health. Weeks after my talk, one of the other presenters — a pastor talking about how to battle back against your anxiety and depression — committed suicide.

I’m broken by that.

So even though I can’t fully control it, you better believe I’m going to fight to do all that is in my power to make sure that doesn’t happen. I’m a writer, so fighting for me looks like picking up a pen or opening my computer. That’s why I’m writing this. This is for those who are considering “giving up,” who see suicide and leaving this world as the only way to silence the demons in it. Who feel the darkness closing in and are ready to let it overtake them forever.

It’s me. This may feel like the last thing you will ever read, or close to it. I hope it’s not. I pray it’s not. Let me get straight to it in case you don’t read anything else: Don’t give up. Don’t end it. Don’t pull that trigger, don’t take those pills, don’t jump, don’t suck in that exhaust, don’t crash that car, don’t pick up that knife. Or if you have, put it down. You need to keep going. I need you to keep going. If you’re looking for a sign, this is it. Just keep going.

Now, if you’re willing to give me just a little more time, let me tell you why.

It may not seem like you have a lot to offer, but you do. Call me crazy, but I believe to my core that everyone has something to offer this world. I think sometimes that can come across disingenuous. I’m sorry. That’s not the case here. That spark inside of you that you feel like is gone? It’s still there. That life you feel like has already died? It’s still there. I’ve interviewed too many people, sat across from too many friends, to deny this: You are never too far gone. You are never too anxious, too depressed, too neurotic to contribute.

I’m reading a book right now that talks about how so many great leaders in history — Abraham Lincoln, JFK, Ted Turner, Churchill, Gandhi — struggled with their mental health just like you and just like me. In fact, your struggle can be the one thing others around you actually need. It can be helpful.

In this same book the author talks about how those who are depressed and those with other mental illnesses see the world more realistically, more as it is. They’re more empathetic. They’re more creative. They keep the world, in my words, more sane and more beautiful.

How do I know? Because I’m you. I had a plan to die once. I knew exactly how I was going to do it. The darkness crept in until it nearly took over everything. I got nice and drunk and was ready. But here I am, writing to you, telling you that the darkness doesn’t last forever. I am using my ailment combined with my skills to write this right now. I’m living proof that we have something to offer the world. Not only can you come back from this, but the world needs you not despite it but maybe because of it.

Please let that sink in.

I know last time we may have had this conversation I told you that this will get better and you told me, “it doesn’t feel that way.” Thank you for that. That’s real. That’s also something this world needs. We need you to hold us accountable for the words we say. So let me really explain what that means.

Whether this has been a week-long struggle or a years-long struggle, there is hope. That said, I’m going to tell you something others won’t. It’s something that isn’t sexy and that doesn’t get you air time on Dr. Phil or the 3-minute news segments. “It gets better” doesn’t mean the absence of all your struggles, all your bad thoughts, or all your crappy feelings. It just doesn’t. And the sooner you realize that, the better off you’ll be.

In fact, let me tell you something that they don’t put on coffee mugs: Your struggle may be with you forever. Sound hopeless? It’s not. Here’s why: Because your struggle can be beautiful and it can also help you. Listen, some of the strongest people I know are like you and me. They don’t pretend. They don’t fake it. They fight it. I believe that we’ve been given great analogies in life, so bear with me for this one.

Do you know what happens when you work out? Run, lift weights, all the things. You create tiny tears in your muscles fibers. That’s why they hurt. But something else happens: That tearing induces a healing response. That healing response makes you stronger.

Your mental health struggle is the same way. It tears you apart, it hurts, but it’s making you stronger. Some of you are going to be nice and toned after this, am I right?

Here’s why else I can say that. I also happen to follow Jesus. Maybe you do, maybe you don’t. But that whole “it makes me stronger” thing is actually a principle that has formed the foundation of the Christian faith for thousands of years. See, in it God tells me he’s using my pain for something greater, to make me stronger. It’s not in vain. He’s got a purpose for it, a purpose that is greater than me.

So when I hear psychiatrists and psychologists point out how true that’s been throughout history, I can’t help but smile. (And in the depths of my soul it’s the most comforting.)

Maybe just one of those points will help you, maybe both of them will. I hope you get to a place where Jesus is the most comforting, but if that’s not where you are right now I get it. We can talk about it if you want.

Still, I want to be honest with you. Coming out of this is going to require some work. But you know what also takes work? Killing yourself. It takes a lot of mental energy, a lot of mental gymnastics and even physical fortitude, to go through with it. I know from experience.

So here’s what I want you to do: I want you to take just a fraction of that energy and put it towards trying something different. Listen, there isn’t one magic bullet for everyone. There isn’t one pill, one exercise, one Bible verse, one sermon that’s going to make this all better instantly. Those that tell you there is are lying to you, and I’m sorry they’ve done that.

But here’s what I can tell you: it starts with a step. One step. I’m going to say it and I don’t care who laughs at me because I don’t care about them, I care about you: Anna of Arendelle knew what the hell she was talking about in “Frozen 2.” Like her, I want you to just “do the next right thing.” If you don’t know the story behind that song, here’s the short version: Kristin Bell, who voices Princess Anna, is like you and me. Her anxiety and depression can be crippling. Some days, all she can do is tell herself to take one step, one right thing, to get out of bed. It’s not corny. It’s not cheesy. It’s reality.

Do the next right thing. One freaking thing. Take a step.

Maybe that’s just putting the knife down right now. Maybe it’s flushing the pills. Maybe it’s turning off the car. Maybe it’s calling your doctor. Maybe it’s giving your counselor one more session. Maybe it’s reaching out to a local pastor or church. Maybe it’s texting your friend and telling them what you’re thinking about. (That’s what I did, and God used it to save my life.) Whatever it is, take the one small step towards life. One step.

Let me end with this. I know some people will call suicide the coward’s way out and try to use that to motivate you to stay. Honestly, I hate that. I don’t know that I’ve ever been motivated to stay somewhere by someone yelling at me that I’m a coward if I leave. “Ok, I’m a coward, whatever. You’re really loud and I’m leaving now.” The truth is if you’re at this point I don’t think that really matters to you. Maybe there are some out there who that works for, but chances are you are not one of them. On behalf of those who have yelled that at you, I’m sorry.

So keep fighting. And when you don’t feel like you can, that’s when you need to fight the most. It’s also when you need to let God (sometimes through others) to help you. I hate those coffee cup sayings that try to convince you that you are the strongest person in the world and everything you need is right inside of you. That’s crap. You’re not and it’s not. If you could do everything on your own, you would be a superhero. You’re not a superhero. You are not meant to fight this alone. The sooner you realize you need help, the better you will be. And guess what: that takes strength.

So take a step.

I pray, I truly pray, this has been helpful. But just like there is no magic pill to make this all go away (although I do take pills myself), there are no magic words. That’s why I’m hoping that you’ll use them simply as a starting point for something else.

I also want you to know I’m here for you. Here’s my personal email: jon@jonseidl.com. Send me a message anytime day or night. Let’s talk.