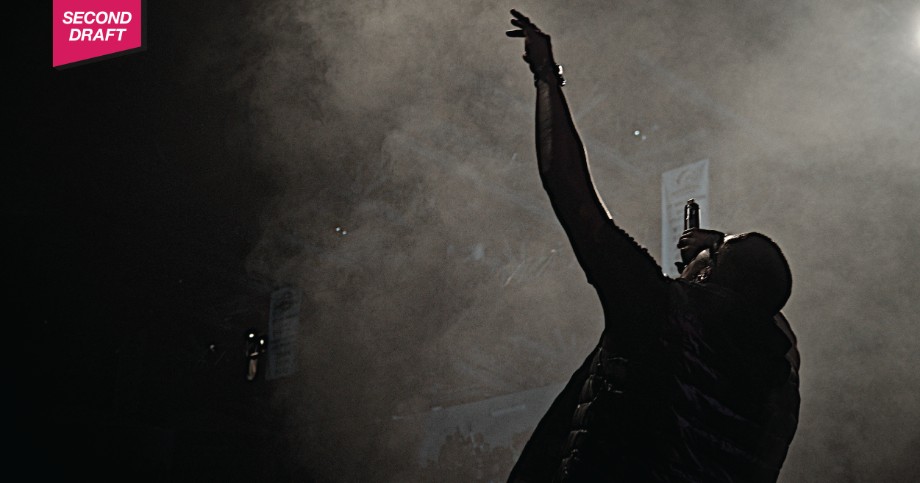 “Now pray father God, you allow me to repent of it,

And any crime scene that bear Malice’s fingerprint.

I pitched those keys like a tent, without thinkin’

Even served our own mommas, without blinkin’

Within a twinkling, seeing what I was made of

While y’all speculate Clipse break up

I ain’t sellin’ my soul for no million…

And anger toward a God which none hath seen.

Formerly known as “Malice” as part of the gangster rap duo Clipse, Gene “No Malice” Thornton here raps an entirely new tune. On March 6, 2012, the man who built a career out of rapping the glories of drugs, women, and violence, announced the death of his old life and the start of a new. In his hit song, “Smoke & Mirrors” he turns his renowned lyrical skill to explaining this new life. “Allow me to repent,” he says. He admits to pitching “keys,” a reference to dealing drugs, to his own relatives or “mommas.” He realizes now how thoughtless and clueless he was to the harm he caused the people around him. But God woke him up “within a twinkling,” and he has never turned back since. If you somehow missed the story that blew open the world of hip-hop when one of the genre’s biggest stars turned to Jesus, check out the film that tells all.

“I was created by God but I ain’t wanna be like Him,

I wanna be Him

The Jack Sparrow of my Caribbean

I remember the first created being,

And how he shifted the blame on his dame

For fruit he shouldn’t have eaten,

And now look at us all out of Eden,

But God sees through my foolish pride,

And how I’m weak like Adam, another victim of Lucifer’s lies

But then in steps Jesus…

Lecrae grew up wrestling with what it means to be a man. Without a father to show him the way, he found an identity in the world of hip hop. But in his song, “Just Like You,” he tells how he realized that life was just “make-believing.” The same lie human kind swallowed at the beginning of time is the same one we each struggle with today. In the original story of humanity Adam and Eve are conned into throwing away life eternal for a piece of tasty fruit. When we let designer clothes, money, approval, ego and the pleasures of this world distract us from God’s great plan for our lives, don’t we fall for the same trap? Check out the story of Lecrae and see how God's plan for our lives is greater than any designer fig leaves this world might offer.

“So in honor of Jimi Hendrix, I string my life instrument backwards,

And choose to play the back,

Because then the word last is first, and that’s beautiful.

I prefer to call them life tattoos.

In a remix of his song, “Beautiful Pain,” Propaganda chants the joys of hardship. His backwards approach to life gives new meaning to the verse from the book of James in the Bible that says, “Consider it pure joy, my brothers and sisters, whenever you face trials of many kinds.” Why cheer the hard times and the rough rides in life? Because the scars you gain are just brushstrokes in the masterpiece that God is painting with your life. When you know the Creator is full of love and goodness, you can see the world backwards and turn the worst of life into the best. If Propaganda missed your playlist, then check out his moving story.