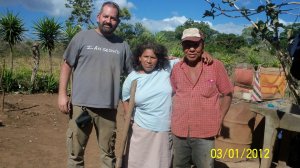 “Survivor’s guilt was eating me up as fast as I was eating the painkillers,” Aaron Walker commented.

In 2008, Aaron returned home as the lone survivor of a car accident. This was two driving accidents in one month. Yet, Aaron walked away each time.

“I had several friends say that I must be part cat after all the close calls,” he remarked.

As a junkie for pills and alcohol, he partied his way through two marriages and multiple jobs. Finally these two near death experiences shifted everything into perspective. During recovery, Aaron stumbled upon Josh Hamilton’s I am Second video.

“When I watched the film, I kept replaying things that had happened in my life that put me in this place. I must have watched it 10-15 times that day,” Aaron noted.

Watching the film was only the first step on a long road of addiction recovery. He once depended on the pills and alcohol bottles. Now Aaron fills himself by living Second.

“You can watch all the videos you want, but without taking that next step, you are still in the same place you were,” Aaron shared.

Time passed and Aaron took step after step.  To overcome his shy nature, Aaron purchased his first I am Second t-shirt and wristband to help him share his story with others.

Today, Aaron not only shares his story with others here in the states, but he takes annual trips out to Nicaragua since 2012. During his first trip, Aaron met Mario, the local drunk. As Aaron shared his story and why he traveled thousands of miles to Nicaragua, Mario began to open up. Shortly after, Mario poured out his alcohol bottle, broke his cigarettes, and began to live Second. Since meeting Mario, Aaron still sees him each time he comes to town. Sharing his story with people all around the world helps Aaron see the good in surviving those car accidents.

How Ashton Kutcher saved me from growing a beard