Former NFL Star, Bradie James Gets Down to Business 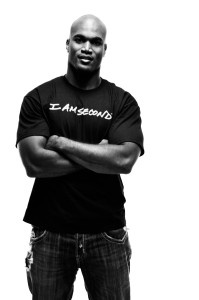 This past week, Second, Bradie James found himself checking into the Las Vegas Convention Center. Conferences and hotel ballrooms are nothing new to the 34-year-old, but this experience was unique.

After the Dallas Cowboys drafted him in 2003, Bradie enjoyed nearly a decade in the NFL.  But, in 2012, his career came to a close. Everything he had once worked towards was now complete. That’s when Bradie began searching for the next step in his life and launched Premiere Electronics. But installing security equipment and home automation isn’t Bradie’s true passion. Electronics is simply an excuse to be an example for his clients and employees.

“You can sell a product, but for me, it’s about building the relationships,” Bradie shared.

Recently, a new crop of interns filled the halls of Bradie’s office. One young man in particular grabbed his attention - not for his hard work, but for his lack of motivation. Instead of letting him go, Bradie pursued an unexpected alternative.

“I started seeing one guy come in late and noticed he was partying a bit, so I started picking him up and taking him to work,” Bradie stated.

Bradie invited the young intern to shadow him. As he watched Bradie conduct meetings and solve conflicts, spiritual conversations began to unfold and their relationship deepened.  As the young man sank further into substance abuse, Bradie sank further into his life.

“People go through that and it’s something you have to deal with. You have to share the good news that, no matter what, God loves us. You can always bounce back.”

Months passed by as the young man learned about Jesus, but he was not the only one changed through this friendship. Bradie experienced an opportunity to live out his purpose in the office.

“I have learned to be meek. It’s not a weakness, but power under control. That is what I have definitely adapted to,” Bradie stated.

As Bradie stood in line to check in at the International CES Electronics Convention in Las Vegas, he represented more than an electronics business. He represented a team of employees and clients he has learned to serve as an example of Jesus to others.

Albert Pujols Plays to Win for Down Syndrome Kids