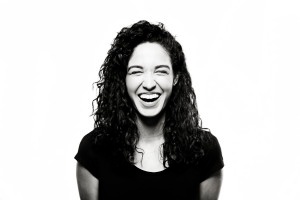 Despite facing rejection from “American idol” judges in 2010, former contestant Moriah Peters hasn’t stopped releasing music since publically sharing her faith — and her choice to save her first kiss for marriage — to millions of television viewers. Peters’ courageous faith and talent garnered the attention of a Jesus follower with connections to the Nashville music industry, and the doors just haven’t stopped opening for her.

With two solo albums under her belt and a starring role in the new movie, “Because of Grácia,” Peters is now releasing singles with her new band, TRALA. She recently caught up with I Am Second via video chat, opening up about her music career, her marriage, and the message she wants to convey to America right now.*

IAS: Your first two albums, “I Choose Jesus,” and “Brave,” were solo. Why start a band now?

MP: After I finished touring for “Brave,” I was looking for serious direction. I took a trip to Israel and visited Mount Moriah, my namesake. I sat on top of that mountain and I just knew I was going to have a revelation that day. I prayed, God, what am I supposed to do next? Because I’m done with music.

IAS: You were done with music?

MP: I was tired of carrying my own brand and feeling alone — like I had done it all myself. I had a great label, management, and band. But at the end of the day, the CD and the banners had my name on it. There is something exhausting about constantly promoting yourself. When I was on top of that mountain, the very specific word [from God] I heard was, No you’re not done with music, this is just the beginning of another project that’s going to involve your bandmates. It’s going to be from a global perspective, and there aren’t going to be any limits or boundaries. I thought OK, if that’s what I’m supposed to do, than I’m going to do that.

IAS: So how’s writing music with TRALA [Peters and her former backup bandmates, Jesi Jones and Julie Melucci] for the first time going?

MP: It’s been refreshing and so fun. We wrote songs without any vision or concept of what we were supposed to do. We had no genre in mind, no limitations — we just wrote from our hearts.

IAS: Your first single, “Holy Collision,” charted alongside Depeche Mode in the alternative genre. What prompted you to not just release songs within the Christian genre?

MP: We let the music determine where we would go. When we looked at this body of work it fit into the alternative genre. What’s come out of it is magic, and I think what we’re trying to communicate through our songs is important.

IAS: What message is TRALA trying to communicate?

MP: We’re a group of musicians who lean on the truth of what we’re singing about and the skill of how it’s being played. We’re passionate about the message of our new single, “Creature Machine,” which is about the modern state of communication and technology. Our third single is about camaraderie and women coming together versus competing.

IAS: You're in a new movie, “Because of Grácia,” released in September. In the trailer, you play a high school student who stands up for her faith in a public way that causes a stir, much like you did on “American Idol.” Did your own story inspire you to take the role?

MP: That was a huge part of it. The director, Tom Simes, came across my “I Am Second” film and asked me to audition. I was backstage on a tour on an iPhone and didn’t think anything would come of it. But I accepted the role because I want to convey the message that persecution is a privilege, which is exactly what it is.

IAS: That is a controversial statement, considering how divided our country is right now on so many issues.

MP: Not everybody has the opportunity to be in an environment where they are the minority. When you live in a world where you’re constantly part of the majority, I think you miss out on a lot of lessons to be learned — on every level — whether it’s belief systems or the culture of where you live. I’ve learned more about my Hispanic culture and the sacrifice of my ancestors since moving to Nashville than I ever did growing up in Los Angeles.

MP: I was the majority in Los Angeles. Everybody spoke Spanish and there were great tacos on every corner. Then I moved to Nashville and I was like, “Where are all my brown people at?” [laughs] I ran into some weird situations since then, feeling the racial tension of what we’re facing today as a country. Because I experienced that, I am more appreciative of where I’ve come from, and what my parents and grandparents have done for me.

IAS: Switching gears. It was inspiring to see you wait for marriage for that first kiss. These days, how are you keeping your marriage strong as you and your husband [pop performer Joel Smallbone] continue to stay busy with new projects?

MP: The challenging part about our marriage is the distance. When we each have a show on the same day it’s difficult. But it’s all we’ve ever known, so we cherish the moments we have together. It makes it difficult to take each other for granted.

MP: When I look at what TRALA is doing — the songs we’re releasing, the girls I get to work alongside — none of this was supposed to happen. None of this was a part of my plan; I quit on that mountain. All of this feels like an added blessing. It gives you more gratitude for what you have.

In November, TRALA will release its third single and perform with Winter Jam, Christian music’s largest annual tour. TRALA’s first full album is slated for release early 2018. You can check out Moriah Peter's new band and their music at www.tralamusic.com.

*Interview edited for clarity and brevity

Whitney Thompson is a stay-at-home mom and freelance writer based in Dallas, Texas. She has written for several publications including Advocate magazine, Prison Fellowship’s Inside Journal, and Upper Room’s Teen Devozine.