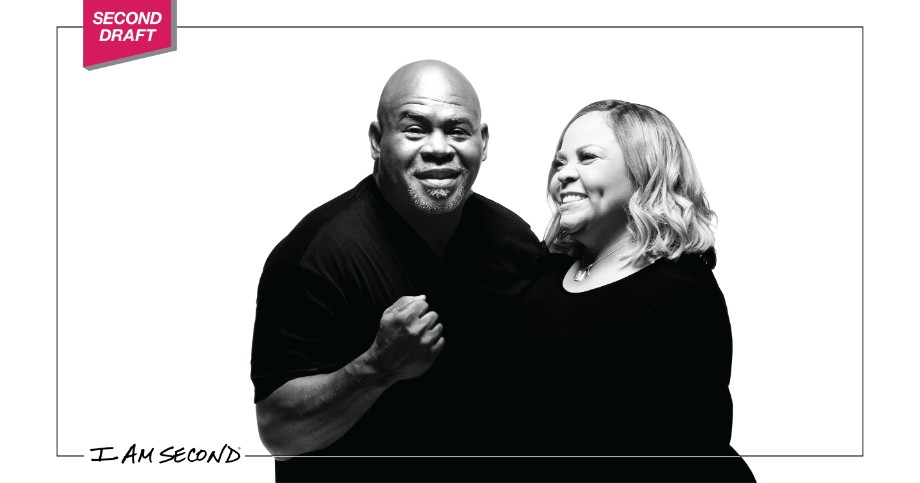 David and Tamela Mann star in numerous Tyler Perry films about love and family. But their famously happy marriage is far from what they grew up with. In their film, they tell their inspiring journey of moving beyond a messy past.

“Let’s start with three-year-old me, that is when I first saw my mom abused. That’s where the vicious little boy began. I flipped the switch. There was no turning it off after that. I would literally wake up night after night as an adult shaking, fighting, tormented.” -David Mann

Address the present by naming the past. Seeing men hit and abuse his mom turned David into a vicious and violent person. His earliest memories go back to this. Even his dreams were filled with him fighting off violent attackers. Hiding from a messy upbringing or home life would not have saved him. Ignoring it would only bury such anger and resentment deeper. His anger problem wasn’t even a conscious decision, emerging even in his sleep. David had to first recognize that his present anger issues grew from a past filled with violence. There’s a reason people say “Forgive and forget,” and not “Forget and forgive.” Before you can let something go, you have to first recognize what you have been holding on to. As the Bible says, “The truth will set you free.” So go ahead and name whatever truth haunts your dreams.

“Where I came from you see a lot of physical, verbal abuse. For me to not be that person, that’s God’s grace for me. Many people become a product of their environment. You become a statistic. I was determined not to become that, but I almost did.” -David Mann

Trust God. He’s bigger than your past. A person’s upbringing ripples far into adulthood. Many never get past whatever hurts or hangups they pick up from their youth. David sees his escape from his childhood trauma as an act of God. At first, this makes life seem like a giant deterministic cause and effect engine. But David makes mention of something called grace. Grace is God giving us what we need when we need it, even when we don’t deserve it. It’s that grace that actually frees us from whatever deterministic fate your upbringing might attempt to force on you. As God says in the Bible, “My grace is sufficient for you.” When you are in need, God is enough. What he gives is sufficient. God can give grace for you to move past your past. God’s grace is strong enough to set you free.

“God had a destiny for my life, but I would need to trust men to get there. I found myself teaching at a men’s seminar when God pushed me to share my story. ‘I hate all ya’ll,’ I told them. ‘I don’t trust any of you. Not because of what you did to me, because of what you did to my mom.’ Something just broke off of me that day. I received true deliverance.” -David Mann

Share your struggles. It makes your burden lighter. David had been asked to speak at a men’s seminar. He had notes prepared when suddenly he just felt compelled to go off script and say out loud a truth he had always kept secret. He told an entire room full of men how his past made him want to fight each and every one of them. In sharing his struggle he suddenly found the weight of his past slide off his back. There’s a reason why every 12 Step addiction program starts with an admission of weakness. If your past is weighing you down, you will discover sharing it with others makes whatever you are trying to carry far lighter. From the very beginning, it has been a central teaching for those that follow Jesus that we “carry one another’s heavy loads.”

“I never felt really wanted. The spirit of rejection was there. My stepfather filled in some gaps, but then he got sick and died when I was twelve. The person I thought was about to be what I needed as a father was snatched. I drifted off as I got older dabbling into the wrong things.” -Tamela Mann

You need people...and there’s nothing wrong with that. Embrace it. Tamela never knew her biological father. She met him once, but never even got a hug from him. He was indifferent from the start. Her stepfather filled that gap but then he died unexpectedly. This left a gap in her self-confidence as a young girl with no father figure. She could have let this define her life. But she came to learn that needing people in your life doesn’t make you weak, it makes you human. We all need people in our lives. Jesus even taught this. He didn’t come to make people stronger individuals, he came to unite us as brothers and sisters into the family of God. When you declare, “I Am Second,” you join a family of people who all on the path of life together.

“I always had to bite, to lash out. I had to have the last word. I had to protect myself. It took a while going into my marriage to let my guard down. He couldn’t tell me anything. It took me a while to learn I could be loved and receive love.” -Tamela Mann

Be patient. Healing takes time. In the Bible there is a letter written to a church in a city called Ephesus. The people in this church were supposed to be some of the more mature followers of Jesus. And yet they are told this in the letter: “Be patient. Put up with one another in love...Try your best to remain as one. Let peace keep you together.” These people had some serious flaws, enough where they are told to "put up with one another." When David and Tamela got married they didn’t have it all figured out. Tamela even admits it took her years into her marriage to let down her guard. Sometimes we just need to put up with people’s weaknesses, because we need them to put up with ours. Whatever past issue your trying to work through be patient. Be patient with yourself. It’s going to take time. Be patient with the people around you, they are all dealing with a past, too.

If somehow you missed David and Tamela Mann's film check it out HERE. You'll be glad you did.