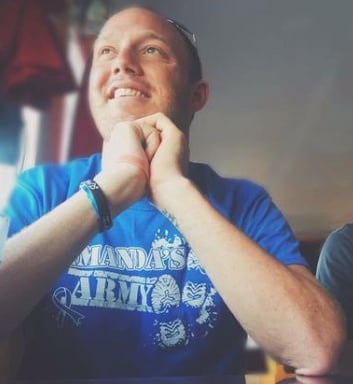 But while that's important for you to know, here's what's more important: While dying, he's living. Like, really living.

Shaw is a former NFL linebacker. That means he was once one of the most finely-tuned human specimens there is, playing in a league filled with elite athletes. Now it takes him five minutes to put his socks on.

He has ALS. And unless you lived in a hole last year, you know what that is from the hundreds of videos showing people dumping cold water on themselves to raise awareness. It worked.

But now that everyone has dried off, the reality is there are people still suffering from the degenerative disease. They're dying. Like Tim Shaw.

Shaw is normal. He struggles with anger, sadness, and fear. How could he not? But struggling with those things is different than letting them consume him.

"I believe people are made for a purpose," Shaw told The Tennesseean recently. "Sometimes specifically, God says, 'This is what I made you for.' In my situation, I believe He will make good out of every situation. He didn't have ALS planned for me. But He prepared for me for the tough time He knew I'd be going through.

"It doesn't make things easier and it doesn't take (ALS) away. But it gives me peace. There's also sadness in there. There's fear. There's anger. But above all, there's peace."

As I write this, a song plays on my computer. It couldn't be more appropriate:

You call me out beyond the shore into the waves.

No fear can hinder now the promises you made.

Shaw has traveled to Brazil to dig wells and Haiti to serve in orphanages since he was diagnosed with the disease. That's incredible. The man who's dying is spending some of his last days helping others.

"I know myself from experience that when I do things selfishly, I don't feel nearly as good or nearly as fulfilled as doing things for others," he told the paper. "It's kind of a lesson I've learned throughout my life and a lesson I would love everyone to test. Go ahead and do something for someone and don't tell anyone about it. You'll have this overwhelmingly joyful and peaceful and fulfilling feeling."

See what I mean? He doesn't just wear a bracelet that says he's Second, he embodies it. That challenges me. I hope it challenges you. 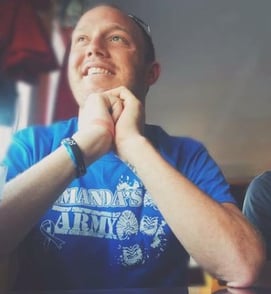 Tim Shaw, wearing an I Am Second wristband. (Source: Twitter.com/TShawsTruth)

It reminds me of someone else's story I heard while working in the news business. Ethan Hallmark. Ethan was 13 years old when he died almost a year ago on September 13. But like Shaw, that means nothing compared to how he lived.

Ethan was diagnosed with a rare form of cancer, neuroblastoma, when he was 9. Nine years old. Seventy-three days before his death he sat in a white chair and uttered some of the most striking words I've ever heard from a teenager:

Obviously I want to beat this disease, but I’m not going to be that sad if I don’t. ... Of course I want to live a long life, who doesn’t? I want to watch my sister and brothers go to middle school with me, go to high school, watch them graduate. Even I want to graduate. It’s not really my plan though.

And he touched lives.

My eyes are wet. And I've seen those videos several times.

Ethan Hallmark. Tim Shaw. One truly lived. The other is truly living.

Jonathon M. (Jon) Seidl is a writer, speaker, and digital media strategist. He’s the author of a forthcoming book on anxiety, OCD, and mental health that will be published in fall 2021.