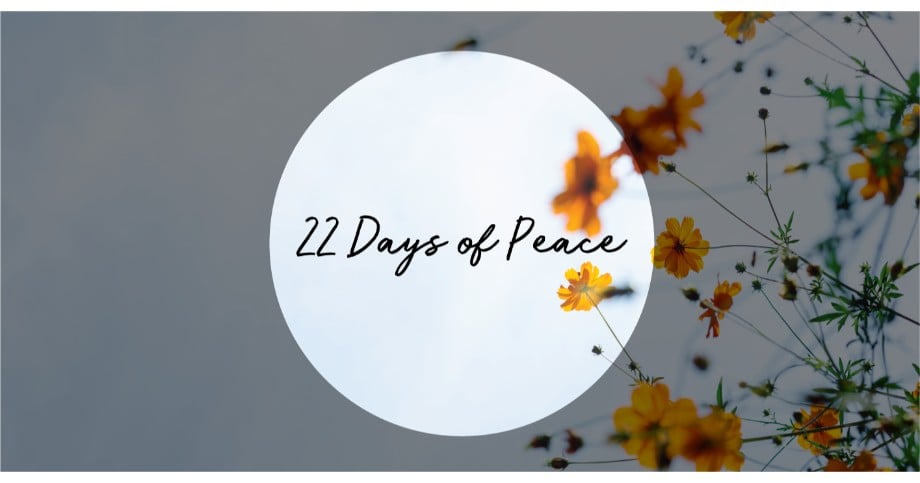 22 Days of Peace brings you the stories, perspectives, and insights of guest bloggers from many backgrounds. Here, they will tell you how they chose peace, when they found Jesus. Click HERE to find all the articles in the series.

I found her - after years of searching and praying and wondering if I would ever find “the one” - I found her. Then, after months together - it ended. Middle of the night texts were replaced by an empty inbox, hours long Facetime conversations turned into awkward talks with friends and family explaining why she wouldn’t be around anymore. Plans for the future became, “Do I even want to get out of bed this morning?”

In these feelings of rejection and loneliness there was one thought on my mind above all else, "This wasn’t supposed to happen.” I ran through every conversation and moment together trying to figure out why, but in the end, I realized I had become so focused on “the one” who wasn’t - that I failed to recognize the one who was, and is, and always will be. He is the one, who despite my sense of feeling alone, had been there all along.

We met on a dating app - I’ve never been a fan of dating apps. Not because I was worried about my tires getting slashed or ending up on the 11 o’clock news, but because to me, the hopeless romantic (to a fault) that I am, it just didn't seem genuine. I mean, for a guy who grew up on Casablanca and Sleepless in Seattle, the endless, emotionless, swiping of profiles just felt wrong. Where was my, “Here’s looking at you, kid,” moment or my climactic reunion atop the Empire State Building? Where was my meet cute? Where was my accidental run in at the office where we collide, papers go flying, and we apologize for our clumsiness as we frantically collect the loose pages. Then we look up and our eyes meet and- well you know what I mean. Online, there’s none of that - but after years of singleness, and praying for God to please just send someone, anyone, into my life already, I decided to take matters into my own hands...

It’s hard to explain just how vulnerable you feel when you first make an online dating profile. You post some photos of yourself, you write some funny and witty responses to the prompts, (which are never as funny and witty as you think), and then you wait...and wait...and you hope nobody you know sees your profile because wouldn’t that be so embarrassing. Then you wait some more -and no seriously please God let nobody I know be on this app too, I’d die- and you keep waiting.

Then you panic a little because nobody’s liked your profile yet and you’re certain it’s because you’re not attractive or your profile just doesn’t have enough action shots of you surfing in Hawaii or gourmet meals at a picturesque cafe near the Eiffel Tower. Because let’s be real - all I’ve got is Netflix and a wardrobe of sweats, and I feel awkward enough as it is without having to stage photos, alright? But then you remember it’s only been ten minutes so why on earth are you freaking out? So you keep waiting, and - *takes a deep breath* - the vicious cycle continues...

Then you see her. You can’t explain it, but there’s just something about her that draws you. Is it her smile? How funny and witty her responses to the prompts actually are? Or is it that without ever having met, there’s something so familiar behind those eyes? So you send a like - she matches back, and once the initial euphoria wears off you talk, you listen, and you let your guard down. You exchange numbers and a week later you meet in person for the first time. She’s everything you’ve been searching for. Simpatico. You talk about your pasts, and your hopes for the future. You tell each other things you’ve never told anyone else. Then, on a Sunday night as you’re driving home from work, she calls you and tells you it’s over.

I’ll be honest, I didn’t feel much of anything that first night. It hadn’t sunk in yet. The next morning hit me hard. Every vibration of my phone was accompanied by a “maybe it’s her”, and “maybe she changed her mind”. I ran through endless scenarios in my head where we talked it over, got back together, and everything worked out exactly as I had planned. We would even laugh about it decades later after a long and happy life - how it almost ended before it started. Only she doesn't text, she doesn't call, and slowly, but surely reality sinks in: it’s really over...she’s really gone...I am alone.

I was hurt, and I was broken, but through all of the chaos and confusion inside my head I heard a voice: “you asked for this.” I asked for this? I didn’t ask for this relationship to end. But in a moment of clarity, I remembered I, in fact, did ask for this. For longer than I can remember I have been praying that God would increase my faith, and make Himself the priority of my life - but how could God be the priority of my life when I had replaced Him with her? When my priority in life was following my own plan and achieving my own selfish desires? By taking her away from me, He showed me how I had put her first; and because He didn’t answer my prayer the way I thought He would, or when I thought He would, I almost missed the blessing.

Now the point I’m trying to make is not some cookie cutter-positive thinking tripe like “be thankful for your singleness” or “don’t worry, be patient, God is preparing someone tailor-made just for you.” What I’m saying is a paradigm shift, a way to be content with your life right now; and that is simply this: don’t worry about the “why”. I know that’s easier said than done, but your singleness does not define you, and the person who broke your heart is not the be-all-end-all. Yes it hurts - but it gets better. Yes some days are worse than others - but you will move on. God doesn’t delight in our sufferings and hardships, but He does use all things for good according to His purpose. So even if you don’t know the “why”, know that He has a plan for your life - plans to prosper and not to harm, plans to give hope and a future, and He who began a good work in you will see it through to completion.

I had spent so many years fixated on finding “the one” that I lost sight of what I was really looking for, what my soul was seeking. I wasn’t just looking for a person who I could tell how my day went, or to watch movies with on a Friday night, or list as my emergency contact (sorry Mom, we had a good run, but it’s gonna happen sooner or later). I was looking for connection, for companionship, for love.

Deeper than that even (on a subconscious level), I was looking for acceptance, for validation, for a sense of worth. The problem that I failed to see with this flawed perspective is that if you seek fulfillment from others, you will always be left unfulfilled, because people (myself included) can never be or give everything that we need. They can only provide so much, and in the end, only God can provide us with endless and limitless love and joy and peace.

I sought perfection from an imperfect creation. But through this momentary heartbreak, I learned to stop asking God for anyone, and to start asking for no one, but the one - the one being Jesus. Because unlike you and I, He is perfect; and in all my feelings of singleness and rejection, He was with me. I was never alone, I was never rejected, and I was never unloved. It took me a while to realize this truth, but I can now confidently say that I found Him - after years of searching and praying and wondering if I would ever find “the one” - I found Him.

Want more on Peace? Order the new I Am Second book, I Choose Peace: Raw Stories of Real People Finding Contentment and Happiness. In stores everywhere. Click HERE to order or learn more. 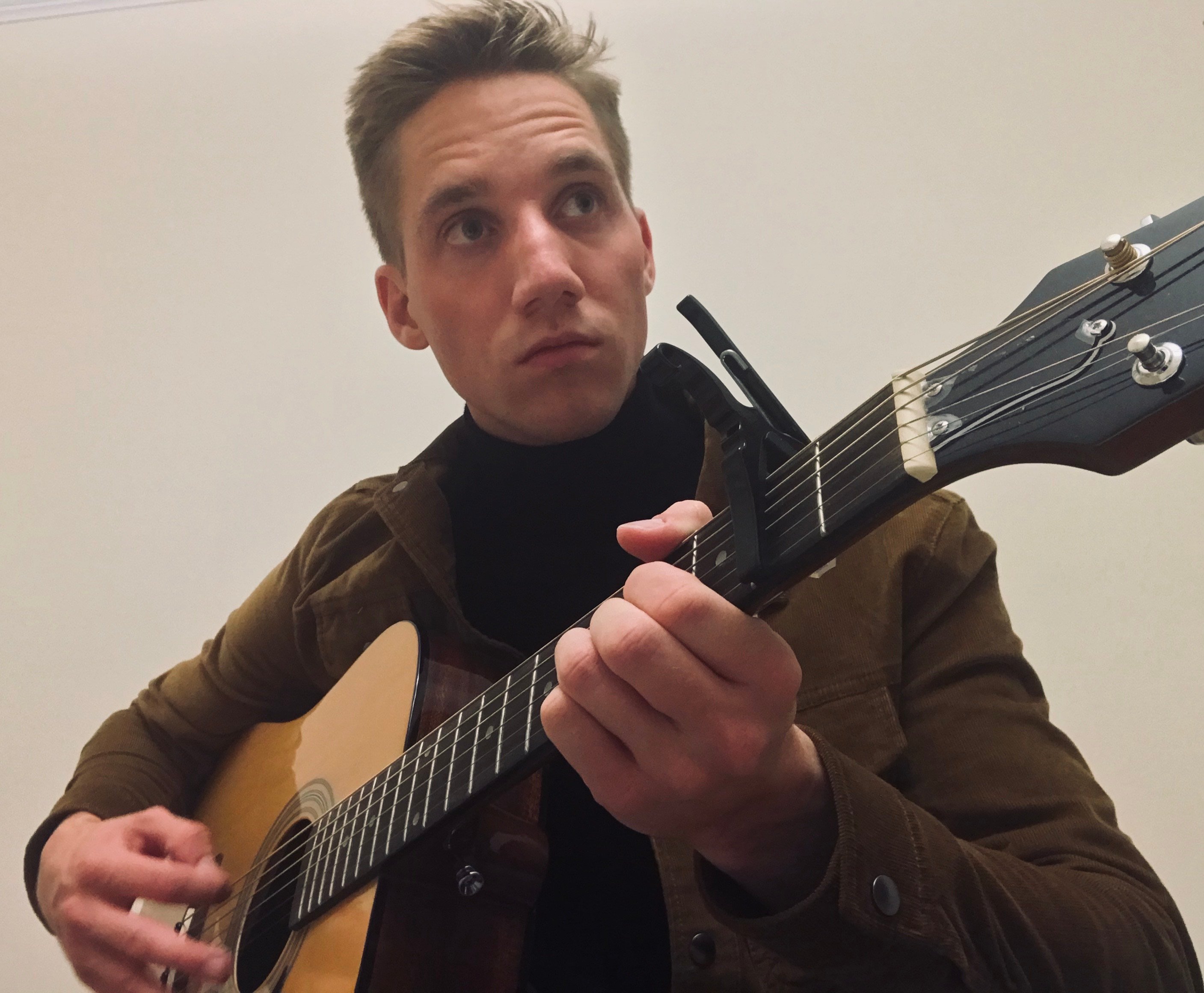 I’m a registered nurse specializing in critical care. I’m an avid writer, cook and listener of music. I spend my free time quoting The Office and Parks and Rec like it’s my job, winning at Settlers of Catan, dominating at Spikeball, or watching a favorite movie for the hundredth time. I currently reside in New Jersey with my Boston Terrier, Andy. I'm new to Instagram, you can follow me @john.alexander.mackenzie.