Manipulative Relationships: Are you in one? And what you can do about it.

Recently I Am Second featured Monica Zuniga Bailey and her story involving sexual abuse. But abuse and suffering comes in many forms. Today, I want to introduce you to Nicole Rhodes who agreed to talk with me about her own experience involving emotional abuse, the manipulative relationship she found herself stuck in, and how she has learned to use difficulties to grow ever stronger.

Doug Bender: There’s a man in the Bible named Paul who said, “I want to know Christ better. I want to join him in his sufferings.” Somehow he came to the point where he realized that perhaps it's through the harder points in life that he grew the most in terms of his relationship with God. In hearing you talk, I feel that perhaps you’ve come to the same conclusion.

Nicole Rhodes: Yes. I’m the youngest of three kids. We grew up in church. We were accustomed to going to Bible studies and church. But I didn’t know how it applied to my day-to-day life. It wasn’t until getting into college that faith became my own. That’s really where I got my feet planted in knowing that Jesus died, rose again, and that I am made right with God.

In college, I started dating a guy. We were friends, at first. Then we started dating. Then we were engaged. But that relationship really wasn’t what I thought it was going to be. And through that I had to call off the engagement. It felt like a large bit of suffering because it was also so public. With social media, everything is on display. That was really the first time where I felt really deeply hurt. It was one of the hardest things I had to walk through at that time. But it was a moment of sanctification for me having to reconcile faith and suffering.

DB: Sanctification, that’s a big word. We don’t always hear that word in everyday language. But I know it is an important word for you and your story. Can you tell me what it means to you and how it’s connected to your story?

NR: The simple explanation is that it’s a word that means we are all being made into the image of Jesus through an ongoing, lifelong process. It’s the word that describes how God is using what happens in life and what happens to us in life to make us more like Jesus. It’s a difficult process, not always the funnest. But God’s Spirit is pulling you towards what he wants, not just what you might want.

DB: Bring me back to your story. You were in a relationship. There was a lot of manipulation. But things were still progressing. You were going to get married. How did you see through all that? Manipulation is not an easy thing to identify or get free from?

NR: In my relationship story, there was emotional abuse and manipulation. It’s a valid response to ask yourself, “Is there something I could have done differently?” Especially if you find this has been a pattern for you, you may need some additional resources. There is counseling or groups where you can go to talk.

For me, I went to biblical counseling afterwards and it really helped me recognize some of the cycles and the childhood traumas that contributed to them in my life. I had to take a really serious look at myself and realize I couldn’t do it alone. It’s easy to try and think you can do it yourself, but you can’t. The way to walk through that is with community and counseling.

There were some things that I saw that made it so I was not comfortable with choosing the right path. I felt like I had to stay in the relationship instead of getting out. I had to get additional outside help to figure out why that was.

DB: Tell me more about this community that you had. Not a lot of people would say they have community. But you did and it helped you through a difficult relationship and really helped set you free from the emotional abuse you were in.

NR: Doing the Bible and community together really maximizes freedom. My community was the ones who were raising the flags and pointing me back to the Bible. I was going through the Bible at the time, being inundated with it. We had small groups of women who were going through it with me. They were able to see the gaps that I couldn’t and to raise flags when I felt like I couldn’t. Being in community and the Bible together helped that be possible. I thought everything was fine, but truly I needed both to see through it. It was courageous for them to speak up like they did.

When you are alone it’s so easy to get overwhelmed with what’s in your own brain and get stuck there. But when you are in community, particularly a Bible-based community, you are hearing other people’s lives, have the opportunity to speak life into them, you hear their stories, and pray for them. It reminds you that what you are going through is not the end. Community with the Bible really brings all that together. 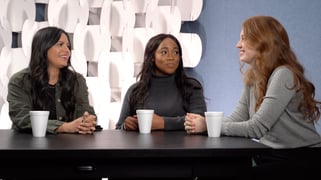 Whether you are dealing with some kind of abuse, a bad relationship, or some other difficulty, Nicole’s story can hopefully help you by reminding you that you are not alone. There is a community of people willing to help. The Live Second Community is a great place to start and there we can even get you some free resources to start building that Bible-based community that Nicole mentioned. Join today.

How to Turn Childhood Abuse into Joyful Adulthood

They Did More than Survive, They Thrived