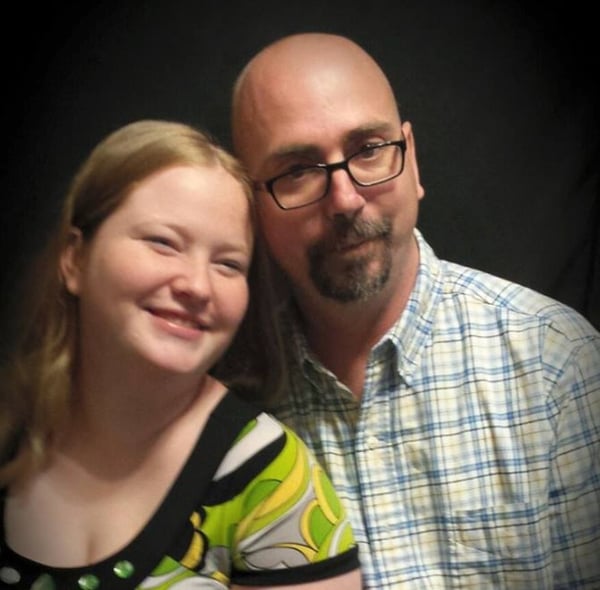 Tim Adriany lived in the eastern North Carolina town of Parkton. He couldn’t drive any more. The cancer spreading throughout his body made sure of that. That didn’t change his love of classic cars, though. While recently visiting with his neighbor, he mentioned a final wish: to ride in his dream car – an El Camino – one last time. He never dreamed what would come of that conversation, and what friends and strangers were about to do.

Adriany’s cancer came as a surprise when having a scan done on his back after a car accident in December 2014. It progressed rapidly, with radiation and chemotherapy treatments unable to help.

Raised in church, he was a man of deep faith and lived second his whole life. When asked about Heaven, he said he looks forward to “whatever God has in store for me.”

He and his wife have two small children with another on the way. Life is precious, in other words. But the possibility of death loomed. How did such a grim cancer prognosis affect his optimistic outlook on life?

“It all depends on how much you want to believe in doctors,” he told I Am Second. “I’m not giving up. My faith in the Lord is strong. He is number one. I know am number two right behind that. We’re going to keep trying. Take it day-by-day.”

Every day Adriany reminded himself of his commitment to live second through the black and white I Am Second bracelet he wore. It was given to him at a prayer meeting. The main color of the bracelet, black, held special significance: Adriany’s original cancer diagnosis was melanoma, which is signified in awareness campaigns by a black ribbon.

Adriany’s beliefs weren’t just some far-away religion or a Sunday school lesson for him. Consider the story of how he ended up letting his entire community know about his faith.

The night Adriany clued his neighbor, Jo Coe, into his dying wish involving the El Camino, what he said weighed heavily on her heart. Coe is an elementary school social worker and a woman of profound faith herself. She knew God was calling her to help her friend in any way she could.

“I went to bed that night and could not go to sleep. It was like Jacob wrestling with the angel. I just could not get that thing off my mind all day Monday,” she said.

"That day was awesome. It was a total surprise."

She wanted to make that dream come true. So she emailed her childhood friend, James Locklear. Locklear’s connections with the newspaper community and social media helped her idea of an El Camino ride for Adriany explode into a full classic car show in just a few days. By Thursday, August 20, they had an overwhelming response, and it was all supposed to take place at their two houses. But that didn’t happen.

The event was so popular they couldn’t fit all of the cars in Coe and Adriany’s driveways. They instead paraded the antique automobiles by Adriany’s house and gave him a ride to the local ballpark where the rest of the cars were displayed. Unfortunately, not one El Camino could make it that day due to mechanical issues. (He did get his El Camino ride a few days later, however, when owners of a 1984, a 1970 and a 1971 model were all able to fulfill his dream.)

In total, Coe said 126 classic cars and one motorcycle attracted 300 people from the surrounding communities – up to 100 miles away. And get this: Adriany only lived in the community around a year and a half.

When asked to describe the look on Adriany’s face when he saw the cars that Thursday, Coe said she couldn’t. It’s unexplainable. He could hardly believe it was all in his honor.

“That day was awesome,” Adriany told I Am Second. “It was a total surprise. I had no idea that that was going to happen.”

Locklear told the Robesonian newspaper Adriany “was like a kid in a candy store” and noted an inspiring aspect of the event for those discouraged by the state of the country: “Those who think Americans don’t have love for one another should’ve been there among this diverse crowd of all races from all walks of life.”

It was at that event that a local news station showed up. Not only had strangers taken notice, but so had the media. When they asked him about it, that’s when Adriany revealed his message for the community.

“I appreciate everything that everyone has done for this but I am Second,” he told WRAL. “This is still truly for the Lord, that’s the only statement I got. It’s still for the Lord.”

“I appreciate everything that everyone has done for this, but I am Second.”

Critics might point to the professions of faith and publicity as ways to garner sympathy. But Coe strongly refutes those accusations, pointing to the way Adriany lived his life in the midst of great trials.

“He is what he says he is. He is a child of God. He’s taken care of his family,” she said. “In all that he was and all that he has become, in all that he is, the Lord is still first. He has remained constant in the Lord.”

Coe said that Adriany wasn’t the only one affected by the classic car event. One attendee related her own story of healing from a blockage in her pancreas and noted that the size of the event led to connections between attendees in need.

A day before publishing this story, I Am Second received news that Adriany died around 11 p.m. on Saturday, Sept. 26, 2015 in hospice care.

One only has to read his public Facebook statuses to see how his faithfulness inspired those around him to live second. His posts are not what you would expect from a man who was battling cancer. They are full of gratitude and praise to God, especially for the small moments. Even activities as ordinary as going outside for the first time in a week and spending time with his preschool-age daughter are transformed into extraordinary blessings in his perspective. 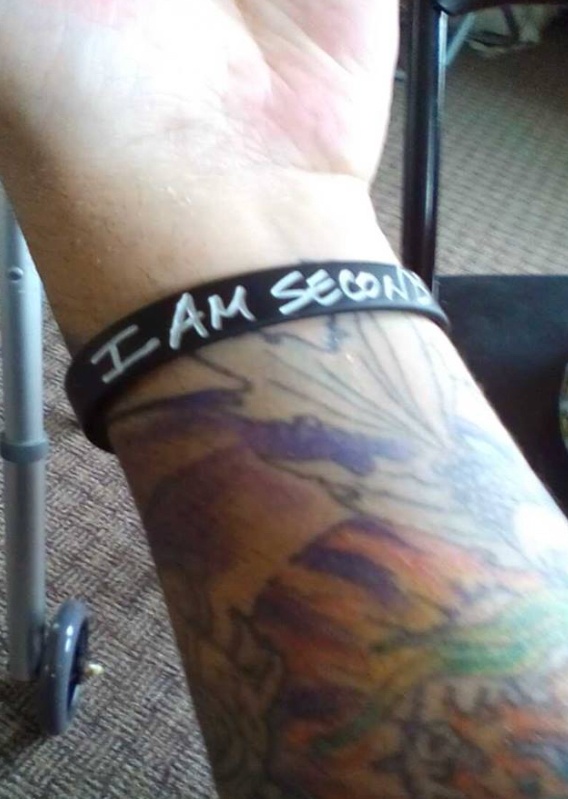 Adriany wearing his I Am Second bracelet. (Source: Facebook)

“As I sit here this morning I think about how, with all the hustle and bustle going on around us it [is] easy take simple things for granted,” reads his post from September 15. “Yesterday I got to color a couple pictures with Ashley to add to our wall of art. It was the highlight of my day.”

Adriany’s recent adoption of Ashley, his wife’s daughter, is just one more example of the way he cares for and protects others in the midst of his own struggle.

"Good morning FB world! For those who have followed my story you are well aware that not only have I been battling with cancer, but I have been battling to adopt Ashley," reads his final Facebok post, four days before his death. "I would like to announce that as of yesterday, Sept 21st I became successful! God is good!

“We have this treasure in jars of clay to show that this all-surpassing power is from God and not from us. We are hard pressed on every side, but not crushed; perplexed, but not in despair; persecuted, but not abandoned; struck down, but not destroyed. … Therefore we do not lose heart. Though outwardly we are wasting away, yet inwardly we are being renewed day by day. For our light and momentary troubles are achieving for us an eternal glory that far outweighs them all. So we fix our eyes not on what is seen, but on what is unseen, since what is seen is temporary, but what is unseen is eternal.”

That’s Adriany. He wasn't wealthy, famous, or prestigious in the traditional sense. But he was faithful, especially while walking through the dark valley of cancer. He put himself second every day. That's how he will be remembered by all those who knew him.

If that inspired you, read the story of 13-year-old cancer patient Ethan Hallmark and his family.