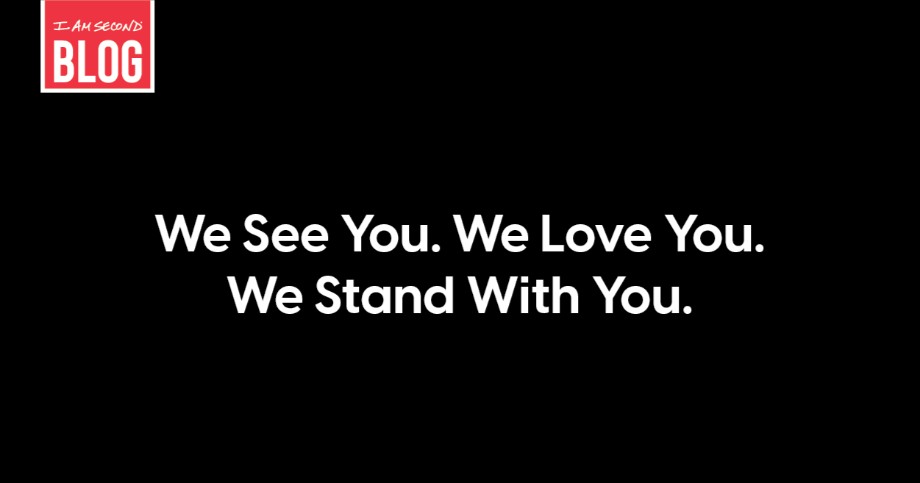 Whether you are a member of our team, a Second on our website, or live in our neighborhoods throughout our nation or around the world: We see you. We love you. We are so sorry for the pain you experience because of the color of your skin. And we stand with you during this difficult time and against those who would dilute your voice with rioting and violence.


From the beginning, I Am Second has endeavored to tell the raw stories of real people who found hope in Jesus. As a part of that vision, we would also like to share a story from I Am Second author Doug Bender, a story of one man’s journey with Jesus towards racial justice.

May all of us be inspired by the uniting message of Jesus to come together as one family.

The local church that first taught me about Jesus when I was a boy also taught me, incorrectly, that God hates interracial marriage. As children tend to do, I swallowed this teaching unchallenged and held it for many years into the future. I’m ashamed to admit that at least once I tried to convince a friend of mine in junior high of this teaching. I only hope I failed to achieve my end.

As a young man, I attended an all-White church in a mostly Black neighborhood. When one of the young pastors there eventually thought to invite and succeeded in bringing to church some of our Black neighbors, he was reprimanded for doing so. He left the church. And our Black neighbors were never welcomed back.

Despite all of this, if you had met me at the age of 18, I would say racism was a bad thing, but way overblown. Somehow, I could believe that the Black kids in my neighborhood got a fair shot at life, when they didn’t even have a fair shot at hearing about Jesus. I doubted the stories I saw on the news and called it “politics.” I doubted my twelfth-grade government teacher, a Black man, who taught us the many statistics demonstrating the unfair and unjust structures that keep people that looked like him from getting a fair shot.

It took some person-to-person interactions to erode my doubts about injustice to belief that it was real.

At some point in college, I began to notice a pattern. With rare exceptions, every Brown and Black person I ever took the time to listen to told me stories of how they experienced blatant discrimination, unjust policing, or down-right hatred because of their skin color.

I met a friend named Terrence at school. I remember him as one of my brightest peers. I envied his way with people, his public speaking prowess, and his fierce logic. We graduated and went our separate ways. A few years later I found myself traveling through his hometown. We met for lunch. I was surprised to find he never found a job in the career for which we both went to school for. He detailed the numerous times he was told he was not a good “cultural fit.”

There is a gap between believing racism is bad and believing it exists on any significant scale. With friends like Terrence, I eventually crossed that gap.

But there is another gap.

It is called, “Will I Do Anything?”

James, the half-brother of Jesus, wrote this in the Bible:

What good is it, my brothers and sisters, if someone claims to have faith but has no deeds? Can such faith save them? Suppose a brother or a sister is without clothes and daily food. If one of you says to them, “Go in peace; keep warm and well fed,” but does nothing about their physical needs, what good is it? In the same way, faith by itself, if it is not accompanied by action, is dead.

I used many excuses for failing to join the fray against racial injustice:

“I’m the Wrong Color” Argument- But I soon realized that to say White people, like me, shouldn’t speak against racism is like saying people who haven’t been abused can’t speak against abuse. Though victims and those who suffer can provide special insight, injustice and violence can be condemned by all.

“There Are Bad People On That Side” Argument- Life has taught me that there are bad elements everywhere. There will be people who riot and create havoc in times of pain. But if you’re looking for a side without problems, you’ll stay on the sidelines. Until eventually you notice, there’s problems there, too.

“It’s All Politics” Argument- I used this as another way of casting doubt on those crying out for justice. Sure, the argument above certainly applies here, some will grab political power out of selfish gain. But is everyone who is making known these injustices all really liars?

“There Are Other Injustices” Argument- It’s true Dr. Martin Luther King Jr. said, “Injustice anywhere is a threat to justice everywhere.” So why must we pick this injustice? But did you know in that same letter Dr. King condemned people who “deplore the demonstrations taking place in Birmingham…but fail to express similar concern for the conditions that brought about the demonstrations.” Dr. King’s challenge is that perhaps we aren’t so even-handed in our outrage as we like to think we are.

I am determined, now like never before, that my faith in Jesus compel me to stand with and help those calling out for help, for justice, and for equality.

Jesus came to make us one family.

I, for one, stand with Jesus on this. As he stands for you.