The pro baseball player who isn't afraid to die 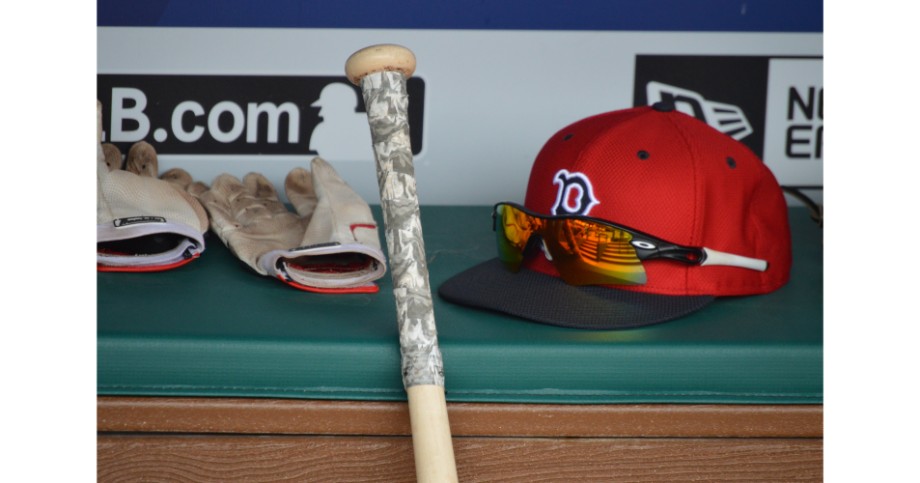 At first glance, it appears to be part of a simple ritual. One of the many, compulsive acts that baseball players do without thinking. But it's so much more than that.

Before Boston Red Sox center fielder Jackie Bradley, Jr., enters the batter's box, he gently bends his waist, points his bat down at the dirt near the catcher, and begins writing. One letter, written twice, takes shape: MM. Only then does he step up to the plate.

If you want to use a cliche, you could say Bradley has done a lot of stepping up to the plate. Earlier this year, he dominated baseball with a 29-game hit streak, the fourth longest in Red Sox history. His batting average is hovering around .300, he already has 13 home runs, and this month he'll be starting in his first All Star Game.

But all those successes on the field haven't given him as much perspective as the two tragedies he endured off of it. It's those tragedies that show up in the dirt with every at-bat.

Matt Saye was more than a best friend to Bradley — he was like a brother. Ever since they were 10 years old, they did everything together. Then came 2011. On August 6, Bradley got a frantic call from Saye's mother.

Saye went to the grocery store and never returned, the lone victim of fatal car accident on the way back.

"That put a lot of perspective on my life, about how short life is. He was only 21 years old," Bradley tells I Am Second from the Red Sox dugout before a recent game against the Texas Rangers. Saye's death came right as Bradley was getting ready to make a decision about signing with the Red Sox.

If there was any doubt about how close the two were, Saye's obituary made it clear: "He is survived by his parents and his sister, Elizabeth Jane Saye of Nashville, Tenn., and his brother, Jackie Bradley Jr. of Prince George, Va."

As a result, Bradley started his silent ritual: Before every at-bat he began etching "MS" into the dirt — a memorial to William "Matt" Matthew Saye.

But it wouldn't stay that way.

Martha Brown was, as Bradley described her, his "everything." His maternal grandmother, she helped raise Bradley and his younger brother when they were growing up. She was a strong woman with a soft nature, one who let people know when they were wrong and supported them when they were right. Bradley shared his dream of being a major league baseball player with her when he was four, and she encouraged him every step of the way.

Health issues were a concern for Brown. She was born with only two valves in her heart, not four, and required a triple bypass surgery in her early 50s. Diabetes added to the risks. In February she underwent a second heart surgery that was followed by complications, including pneumonia.

Brown made progress as time went on. She was able to talk again and eat without a feeding tube. Other than expressing feeling tired, she seemed to be making a positive recovery.

Not too long ago, though, she began telling people she was ready to go home. The doctors interpreted it as she was ready to leave the hospital. Bradley took it differently. On April 21, two days after his 24th birthday, Bradley received the news his grandmother had died. She was 67 years old.

And that's when the drawing in the dirt changed. Instead of "MS," Bradley started writing "MM" for both Matt and Martha.

"It's letting me know they have my back and are in full support of me," he says, sitting on the end of the dugout bench, unable to help himself from tilting his head as the batting practice balls from his teammates leave the park. 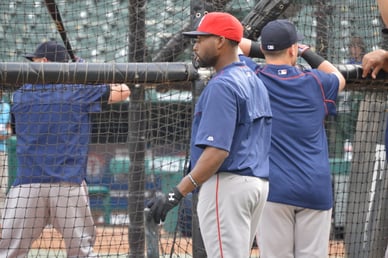 Jackie Bradley, Jr., watches as his teammates take batting practice on June 25, 2016 at Globe Life Park in Arlington. (Source: I Am Second)

For someone who has experienced such tragedies, you might expect Bradley to talk about death like a middle-schooler talks about a bully — sheepishly, dismissively, or spitefully. He doesn't. It has no power over him.

"My grandma used to always tell me, 'I don't understand why people get so upset when people die. Everyone has to pass. Everyone always talks about how they want to get to heaven, but how else are you going to get to heaven unless you die? It's just the passageway to get there. So don't be afraid of it.'"

In fact, Bradley can be so dismissive of death his wife gets upset.

"My wife always hates when I say it, but I say, 'If this is my time, it's my time.' She always says, 'Don't say that!' But I tell her that I'm ready when that time comes," he adds with a serious chuckle. He tries to balance that attitude with the reality that he's a new father to a months-old baby girl.

"I think people are more afraid of the how of death instead of death itself," he explains as fans file into the ballpark and call out his name, his magnetic smile flashing from time to time. "If you told someone they would die a peaceful death in their sleep, they're not too fearful of that, but if you tell someone it's going to be a grueling, tough struggle, that's what gets people worked up a little more."

A large part of that attitude, Bradley says, can be attributed to the peace he's found in his faith. He's been a Christian since he was young and wears an I Am Second bracelet as a way to remind himself and others of how he strives to live. 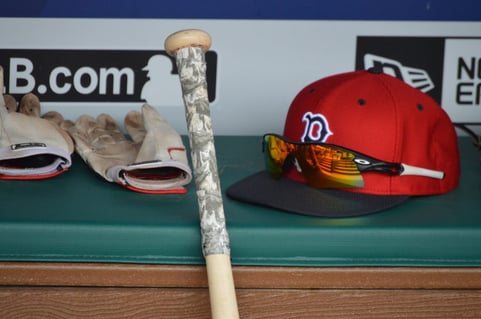 That doesn't mean life is easy. After enduring the deaths of two of those closest to him, Bradley yo-yoed between the minor leagues and the majors. He would get called up to the Red Sox for some brief stints before being sent right back down. Through it all, though, he kept perspective, knowing he "was meant to play this game at the highest level."

"Obviously everyone has things they go through in life, and you have to get through them," he says.

"There will be times you go through stuff, but you just have to know it's going to get better. It always does, as long as you stay steadfast in Him and trust Him. You might not understand what He's doing at the time."

Exactly a week after this interview, the Red Sox suffered an embarrassing 21-2 loss. It was a low point for a team that has been having an otherwise solid season. It was especially tough for Bradley, who went 0-4 and struck out three times. While not another death in the family, it certainly wasn't the easiest of times.

But the next day?

Bradley had two hits, two runs, an RBI, and threw out two runners from center field. The Red Sox won 10-5.

It's reminiscent of some of his words a week earlier: "Struggle is only temporary."

(Photo source: I Am Second)

When recovery isn't a fairytale