How to fight for your marriage when it's falling apart 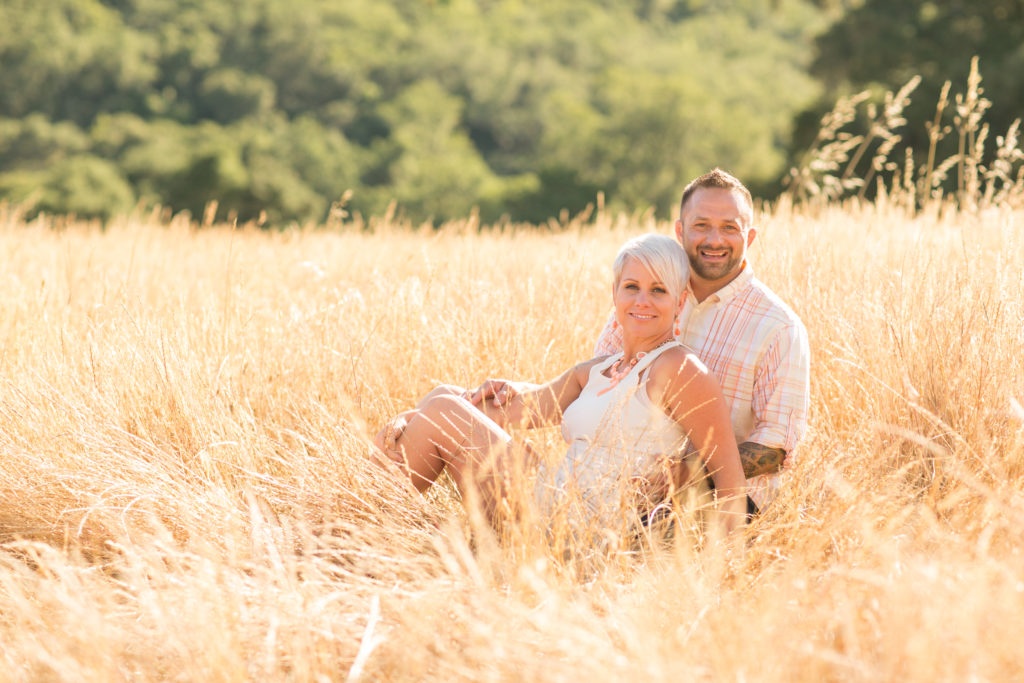 Though, Chad will tell you that the person who fought the hardest for him and his family would not be himself, but his wife, Kathy. Chad’s struggle with PTSD is incredibly important for veterans to hear, though Kathy’s side of the story is equally significant.

We know there are thousands of wives, husbands, and families who have been impacted by their loved one’s fight with PTSD. I Am Second interviewed Kathy Robichaux to give a voice to those who are trying to hang on to their relationships.

Q: When and where did you and Chad meet?

Oh, this should be fun. I was 17 and a junior in high school. A friend of mine went into the Marine Corps and was in the same unit as Chad. He tried setting us up, but I thought

he was too short, so I wasn’t interested. Over the next month I heard many times, “Chad really wants to get to know you,” but it wasn’t until they were setting him up with another girl that I realized I was interested after all. To make a long story short, Chad invited me on his double date and his date, poor girl, was the fifth wheel! Ever since that summer night in 1994 we have been inseparable despite all of our hardships.

We were engaged not long after. I was finishing up my senior year and preparing for our wedding. It’s crazy to think that I was sending out graduation announcements and wedding invitations at the same time!

Q: How did your parents feel about you marrying Chad so early?

Well, my parents were divorced. My dad wasn’t excited, nor do I think he really cared. I know his thoughts were “let’s see how long this last” and “they will be divorced in a year.” My mother liked Chad and seemed to be happy for us, but I think she was just relieved someone else was going to provide for me.

I always craved their love and attention.

Growing up, I never felt important or wanted. My parents weren’t emotionally involved in my life. They provided a roof over my head and fed me, but I always craved their love and attention. So, when Chad came along, he was the first person that wanted and needed me! He loved to take me on adventures like hiking and camping. He was actually interested in being involved in my life and he never wanted to be apart.

We both knew that we wanted to be together for the rest of our lives and wanted to start a family right away. So, on July 15, 1996 we got married! And here we are 21 years later, still married, fighting for our marriage and we will never give up.

Q: You and Chad have definitely fought to stay together over the years. When did the struggle begin?

I honestly thought we were going to live happily ever after. However, pretty soon after we got married, I realized that might not be the case. It became obvious that he didn’t need me as much anymore. We started having kids very soon, and by the time I was 22 we had three children!

I was trying to learn how to be a mother, while Chad was very busy with the Marine Corps. After switching to the Marine Reserves, his career in law enforcement consumed him; I felt left behind. He was doing his thing and I was alone. I thought when you got married you did everything together. Instead, I felt… like I was just “there”. I even felt like I was being used at times.

Q: In his film, Chad mentions the time he was forced to make a difficult decision as a police officer. How did you handle the news of him killing someone?

I really didn’t know how to respond to the shooting. Of course I cared, but I didn’t know how to react. I thought that’s what cops do, “They kill bad guys.” I was only 21 at the time and trying to take care of two young babies! We were so young and bad at communicating; I didn’t think it bothered him as much as it did. It wasn’t until years later that I found out how much that event contributed to his PTSD.

Q: How did it make you feel when Chad left the family to go to Afghanistan time and time again?

It was hard to see him leave, but after him not giving me a choice in the matter, I began to mentally move on and do what I had to do to take care of my children and home. I was oblivious to what he was doing in Afghanistan. It was easier for me to accept his absence if I looked at it as if he was just in an office all day. Plus, with him gone we didn’t have to deal will some of the problems we were going through before he left. It was a temporary fix which would eventually come out in the years to follow.

Q: How did you try to love and take care of Chad after he was diagnosed with PTSD?

At first, I had sincere sympathy for Chad. It was sad seeing a tough guy like Chad be totally broken. I held him every night, wanting to nurture him as much as I could. He didn’t handle stress that well so trying to work on our own marriage problems was again put on the back burner.

I thought things would get better when he opened the martial arts gym, but it didn’t. Chad was becoming a totally different person. He struggled with anger before the PTSD, but this was so much worse. He was emotionally and verbally abusive to me and even our kids! His manipulation made me feel like was losing my mind! My kids and I became so afraid of him. I drifted away from the monster he was becoming and turned my back on him to protect my heart. I wanted to block the daggers he was firing at me.

He was using this lifestyle to help numb himself to his experiences in Afghanistan and the shooting years earlier... I had no clue.

He spent hours on the mats and booked every fight he could. He became involved with other women and stepped outside our marriage. The attention he was getting made him feel good, however it blinded him to the love I had for him and the lifestyle he was living. It was all a façade and, unfortunately, I carried the pain and suffered while he was living as if he was a single man.

I didn’t understand this until later, but he was using this lifestyle to help numb himself to his experiences in Afghanistan and the shooting years earlier… I had no clue. I could no longer stay in the marriage. I stayed once after infidelity and was not going to do it again.

We had to tell the kids that mommy and daddy were getting divorced. While Chad thought it was for the better and that the kids would be happier, I knew deep inside that it was all wrong, I wanted to knock him over the head with a 2x4 so that he could see what he was doing to his family.

Q: Chad talks about your decision to attend church during the separation. What was the driving factor of this decision?

I was to the point where I was completely desperate for comfort. I was hurting so bad, and I didn’t want my kids to experience the pain and anger that I experienced as young kid with my mom and dad. I was broken, lost and scared. I didn’t even have the energy to leave my house. I just wanted to lay in my bed and cry. I was desperate for protection and love.

So, I started praying that God would comfort my kids and me. I also knew that I needed to pray for my soon-to-be ex-husband. I had heard of the book Power of a Praying Wife, and thought the book would help guide me in praying for Chad. I looked in the table of contents and thought I should start in the chapters titled “His Integrity” and “His Choices.” I mean, that’s what he needed prayer for, right? Well, the first chapter in the book opened my eyes. It was titled, "His Wife." I thought, “Chad shouldn’t be praying for me, I don’t need help! He's the one who messed up and destroyed our family!”

I never trusted that He would walk me through whatever situation I was in, good or bad.

Though, that’s when I realized there were areas where I had failed as a wife. I had never really prayed like this for Chad before. While I had found the Lord at the age of 11, I never had an intimate relationship with Him. I never trusted that He would walk me through whatever situation I was in, good or bad. I didn’t run to Him when Chad became weak to seek wisdom on how to support my husband through the hard times.

When we decided to work on our marriage (total step of faith, I did it for God) I couldn’t just pretend that nothing happened. That’s not forgiveness. I would ask God every day,

That change didn’t happen over night. It was a full year of intensive prayer and not allowing my emotions to lead my decisions. It was a complete surrender every day and it was not easy. In fact, it was easier to build walls around my heart and be bitter. Being vulnerable with God and myself was hard, but it was totally worth it.

We have been married for almost 21 years and we’re stronger than ever and have a beautiful marriage. We are learning how to forgive each other and ourselves. Chad let’s me express my feelings, he’s very understanding, he cares about my emotions, and he doesn’t get defensive. It’s been a long journey, and our story is rough, but now God is using our story to help others.

God has used Mighty Oaks, our program that brings healing to veterans struggling with PTSD, to help me talk about my journey with other women that have experienced the same path as me.

Q: How would you encourage those dealing with similar marital issues?

It’s easy to want to give up. My mom would always say, “Just pack your stuff and leave.” But take it from me: Don’t give up, and don’t leave. If your safety isn’t on the line, lean in to your marriage. Put your faith and trust in Christ alone and He will help you through it.

You can’t give up on them. Fight with them and for them.

It’s also extremely important to educate yourself on PTSD and to be involved in the healing process. These men are looking for someone that will hold them and love them through their journey.

When they get angry, instead of saying things like “You’re being a jerk, you’re useless,” try to encourage them. They’ve already been cut off from what they’re good at. It’s all they know! You can’t give up on them. Fight with them and for them. Get involved and find a program. Be deliberate about getting the help they need.

Hear Chad’s side of the story in his new white chair film:

Thank you, Kathy, for sharing your story with I Am Second, and thank you to all the families that continue to serve our country by supporting their veteran spouse, parent, or child. Learn more about the Mighty Oaks Warrior Program.