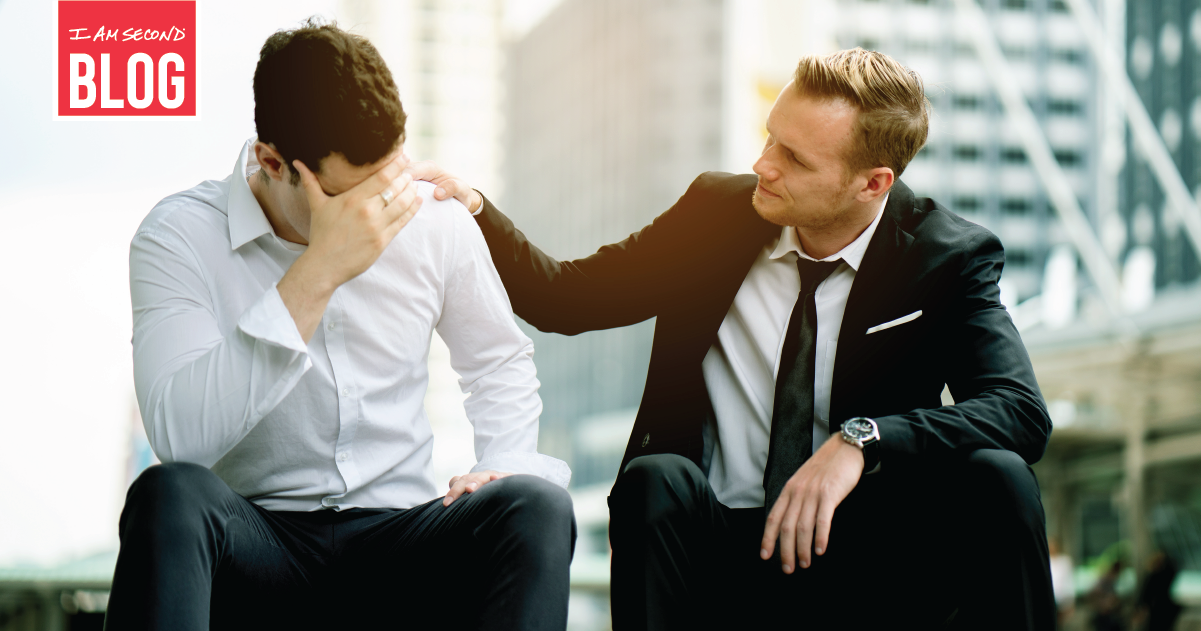 In the old days, men could get away with being sullen, silent and emotionally inaccessible. But a generation’s failed experiment with modern stoicism has led to an emotional revolution. It’s now standard fare to assess the strength of a leader not just on his skills and pedigree, but also his ability to emotionally relate with others. Fathers and husbands are now widely expected not just to provide the bread and bacon but empathy and care as well. Even Forbes magazine says that emotional competency is “no longer just a nice-to-have skill, but one of the World Economic Forum’s Top Ten Skills (and arguably it underpins the other nine).” I recently interviewed Ben Peterson (whose I Am Second film just came out) who in many ways is one of those stereotypically tough manly men. But this army veteran had to stare down PTSD from his time in the war, plus the additional trauma of childhood abuse. And with that battle he learned to develop an emotional competency that has made him even tougher.

But what is emotional competency? And how does it behave? The answer to this is a book (and a rather long one at that), so here we’ll just scratch the surface. But it’s an essential set of skills and behaviors that can improve every area of your life.

Men have feelings. You need to know that. Why? Because whether you know you are feeling something or not, those feelings are driving you. The fool is driven around by feelings they don’t know they are feeling. This is like the old cars with no dashboard sensors. Just because there is no “check engine light” doesn’t mean you don’t need to check the engine. Not having that system of sensors just makes your job harder and the likelihood of total engine failure higher. The sensors are there to alert you of something that needs to be managed. So get used to feeling things, learn to identify what those feelings are, and give a name to them. Read Psalm 69 in the Bible if you are looking for a decent anthology of emotions to draw from. You’ll see that manly men like the warrior-king David have a highly tuned set of emotional sensors.

Competency means vetting and filtering emotions, not just feeling and expressing them

There’s a thread of current opinion that says emotional maturity means expressing all emotions, fully and without restraint. But this is the wisdom of a child, not of an emotionally competent man. Only children yell and scream every time they “feel” like they should yell and scream. Everyone feels emotions. But not every emotion should be expressed immediately, fully or without constraint. If you feel anger, that doesn’t mean you should shout, name call or assault people. Even if these are “emotionally honest” behaviors, they are not helpful. There is a verse in the Bible that says it this way, “Fools show their annoyance at once, but the prudent overlook an insult.” Emotional competency means you have developed the skill of knowing whether the anger you feel should be shown “at once,” or if you need to let it go and address it another way at another time.

Competency means calmly expressing the fire inside, not stuffing it down

The old-fashioned way for men to handle emotions is to ignore them and stuff them deep, deep down inside. But this results in either an explosive man (one who stuffs it down, until it all explodes back out) or an emotionally unavailable man (one who can neither relate nor empathize with others). So yelling isn’t the answer and stuffing it down isn’t the answer. What is? Again, we’ll turn to the Bible for a piece of wisdom when it says, “A soft answer turns away wrath, but a harsh word stirs up anger.” Finding “soft” ways of expressing no-so-soft emotions can turn your emotional bomb into an efficient engine. To use a car analogy, a gas-powered engine is basically a controlled explosion. The full force of energy inside the gasoline is released, but because it is done in a slow, controlled manner, you get a quiet drive through town, rather than a bomb. Emotional competency is a car, not a bomb.

Competency means you seek help when you run out of competency

My neighbor has had a car parked in their backyard for over a year. I’m sure there was a plan at some point to get it fixed and back on the road. But whatever the plan was, my neighbor’s ability to execute that plan has fallen short. They didn’t have the skills or resources to get it fixed. Men do this with their emotions more often than we like to admit. Sometimes you need to see a counselor. Sometimes you need to talk to a pastor or mentor. And everyone needs to talk to a friend about the emotional challenges they are facing. Unless you’d like to be the human equivalent of a junked up backyard, you need to recognize when you’re out of your depth and need some help. If you don’t know where to start on this one, talk with one of our completely free Live Second Coaches. They are not counselors but they’ve got some tools to get you back on the road.

Emotional competency means that you have the emotional strength and sensitivity to love and care for others, in addition to yourself. If it was all about you, then this article would be called “The Emotionally Competent Man-Child,” but that is not our goal. Love and care for fellow human beings is our goal. Emotional competency is an essential milepost towards that goal.

So practically speaking this means that you need to develop an emotional curiosity. When you are interacting with someone, you should be curious about how they are feeling. It should be something you are listening for, asking questions about, and trying to imagine yourself into. Many men are curious about their work, their hobby, or their sport. They read magazines, buy specialized equipment, and consult experts, all in the hope that they can figure out the secrets of their trade. But an emotionally competent man has this same intensity towards the feelings and thoughts of others. And like any other endeavor, you’ll be terrible at it at first, but practice, practice, practice, and you’ll develop emotional competency – and hopefully – emotional expertise.

Contrary to the old way of defining manliness and strength, true toughness comes with a full set of emotional tools and skills. Watch Ben’s film to see how he found strength in expressing his emotions, especially during periods of brokenness. You’ll see that when you lack emotional competency, you lack true strength. Strong men are emotionally competent men.

How I Overcame My Social Anxieties