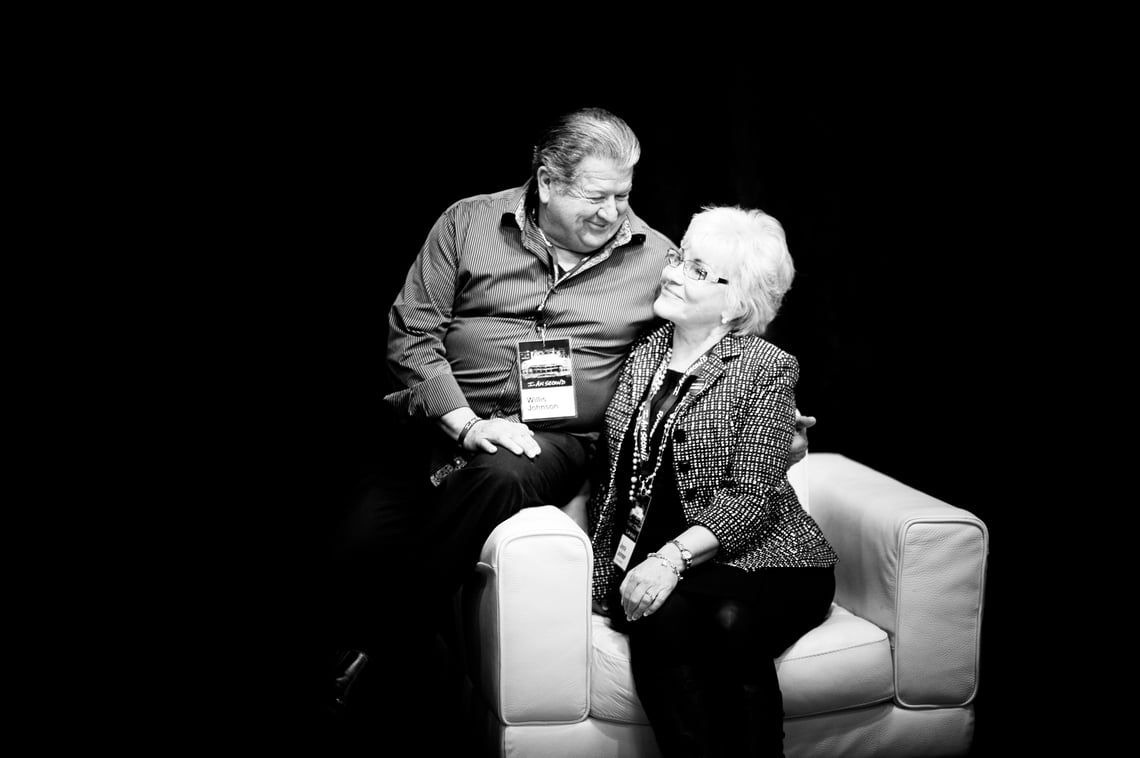 Willis Johnson founder and owner of Copart and Takl with his wife Joyce Johnson.

We recently launched Second Helping, an I Am Second initiative with the help of Takl, that brings practical household help to veterans, single parent families, seniors, and those experiencing financial difficulty. But I was curious about the backstory of Second Helping. How did something like this come to be?

It turns out, that the man behind Takl, the impetus for Second Helping, is as fascinating and surprising as the company he started. Takl has figured out how to find someone to mow your lawn within the hour. My wife hasn't even figured out how to get me to do it that fast. Willis Johnson has a full head of peppered hair, with none of the pomp you'd expect of someone who started from scratch the leading company in his industry. But bored with retirement, he launched an app that's mobilized an army of handymen to fix almost anything around your house.

So I got him on the phone to hear his story, starting with how he married his wife, Joyce.

"About ten days after our first date, I went over to her house. It was real early in the morning. She had those big round curlers in her hair. I had a ring in the glove compartment. I brought her to the car and asked her to marry me. And she said, “Yes.”

"We got married and bought a house. But I decided I didn’t need to get a job, my dad always worked for himself. I learned from him. I could work for myself. So, we sold our house and moved into a junkyard. I started my own wrecking yard and I grew it from there."

Within the first minute of our interview, I discover a man willing to take risks. You don't ask your girl to marry you ten days into the relationship or sell your house and move into a junkyard without some seriously big, uh...well, let's say he's a bold man.

"Our company ended up having a number of locations and I decided to go public with the company. From there, I started acquiring or building a new yard every six weeks for the next eighteen years. Copart is now the largest salvage auction company in the world, today."

Willis Johnson started Copart from a single location in Sacramento, California. Today, Copart has 190 locations in 12 countries and sells a car, on average, every three seconds, making Copart the largest salvage auction company in the world.

"I retired seven years ago, but I’m still chairman of the board of Copart. But, I got bored not being involved in business. I happened to be in New York City for a dedication involving an Orange County Chopper I repaired for the Statue of Liberty. I had not been traveling for a while, because I had been retired. Instead of getting in a cab, we got into an Uber.

"Prior to Uber, coming into New York City, you had to get in a cab. You wait in line. You could hardly get one. They were dirty. It was kind of neat just getting into this nice black SUV from Uber. I thought whoever dreamed that up was a genius. I kept jumping in the front seat giving my drivers the third degree asking how this works. What a cool thing, that you can run your own business without an accounts payable, accounts receivable, you work for yourself."

I guess that's why I don't run a billion dollar, multinational corporation. The last time I got in an Uber, I took a nap. I flew into JFK airport in New York and needed to get to New Jersey. I hopped into an Uber, gave my driver the address, and promptly dozed off until about Manhattan. Never did I think that this could be a life changing experience or a ride that could launch my next career.

When Willis returned to his home in Nashville, another piece of the start-up puzzle fell into place.

"Well, I met with my friend Greg and he wanted to build a company for handymen. I said good for him. But I didn’t want to start up a business. Remember, I was retired. I went online looking and found that just about every town in America has a handyman. We combined this idea of a business for handymen and overlaid that with the on-demand concept.

"We thought, let’s think about a gig economy business that just does small jobs, handyman type stuff. We ran with that concept and started Takl. Most of the jobs are around $100. These are small jobs, ones that don’t require a permit or anything. Usually, providers show up within the hour to do whatever project you need."

I have to admit, before I met with Willis Johnson, I had the picture of a middle aged Silicon Valley type guy, some fake glasses, and a V-neck. Instead, I met a man who grew up on a dairy farm, spent his life in junkyards, and only recently came out of retirement to start a company based on an app.

I had some practical questions about Takl. Like, how do you know what price to set for cleaning out the gutters?Or how do you estimate the time for trimming the hedges and painting a wall? Well, because he's done all that himself. Long before he ever joined NASDAQ, he worked for his dad in one of his many hands-on type businesses or tore apart cars in one of his junkyards. Even more recently, he told me the story about fixing up an Orange County Chopper. Takl isn't just some idea he had, it's part of the life he's lived.

A large part of his life has always been about giving back however he is able.

"So, we are doing all this when I Am Second, comes to me with an idea. People can use Takl to get just about anything done around the house. What if I Am Second helps people who couldn't afford to pay for these jobs? They wanted to help people in the community using Takl. That lead to the creation of Second Helping.

"Now, after doing a job with Takl, when you checkout you can make a donation. That money will help a single mother who can't work, an elderly couple or a veteran. People can donate money and that pays for a job at someone's house.  Individuals, churches, organizations can go through Second Helping to help people in their community.

"I’m a firm believer in giving the maximum. Some people can’t afford to give money, but they can give their Saturday. They can become a provider with Takl. And the money they earn can go to Second Helping. A lot of people can give money or time. God wants that. I hope to see people help their neighborhood, all over the country, through Second Helping."

Takl is an app that helps with small jobs around the house. Second Helping uses that platform to assist people who need the help but struggle to pay the light bill. I've been with I Am Second since before Twitter. I've had the chance to be a part of a ton of awesome events, initiatives and projects. But Second Helping is in a whole different category.

I just want you to think about it for a second. You're working two jobs struggling to pay the bills or you're a single mom just trying to keep life together, and you just can't get the lawn mowed. It's a simple thing. It's really not that big of deal. But you just can't get it done. You need someone to help you out for an hour to mow your lawn. Where are you going to find that someone? Now, you can find that someone through Second Helping. If you're the type that wants to give some help, you can either come mow the lawn yourself or pay the guy who will. That is a revolutionary concept, the kind of thing that can change the world.

You want in? Here's how you can get involved:

GIVE- your donation will provide veterans, single parent families, seniors, and those experiencing financial difficulty with needed household projects, free of charge. Click here to give.

APPLY-  if you are a veteran, single parent, senior, or are experiencing financial difficulty and need help with a chore around the house, apply here.